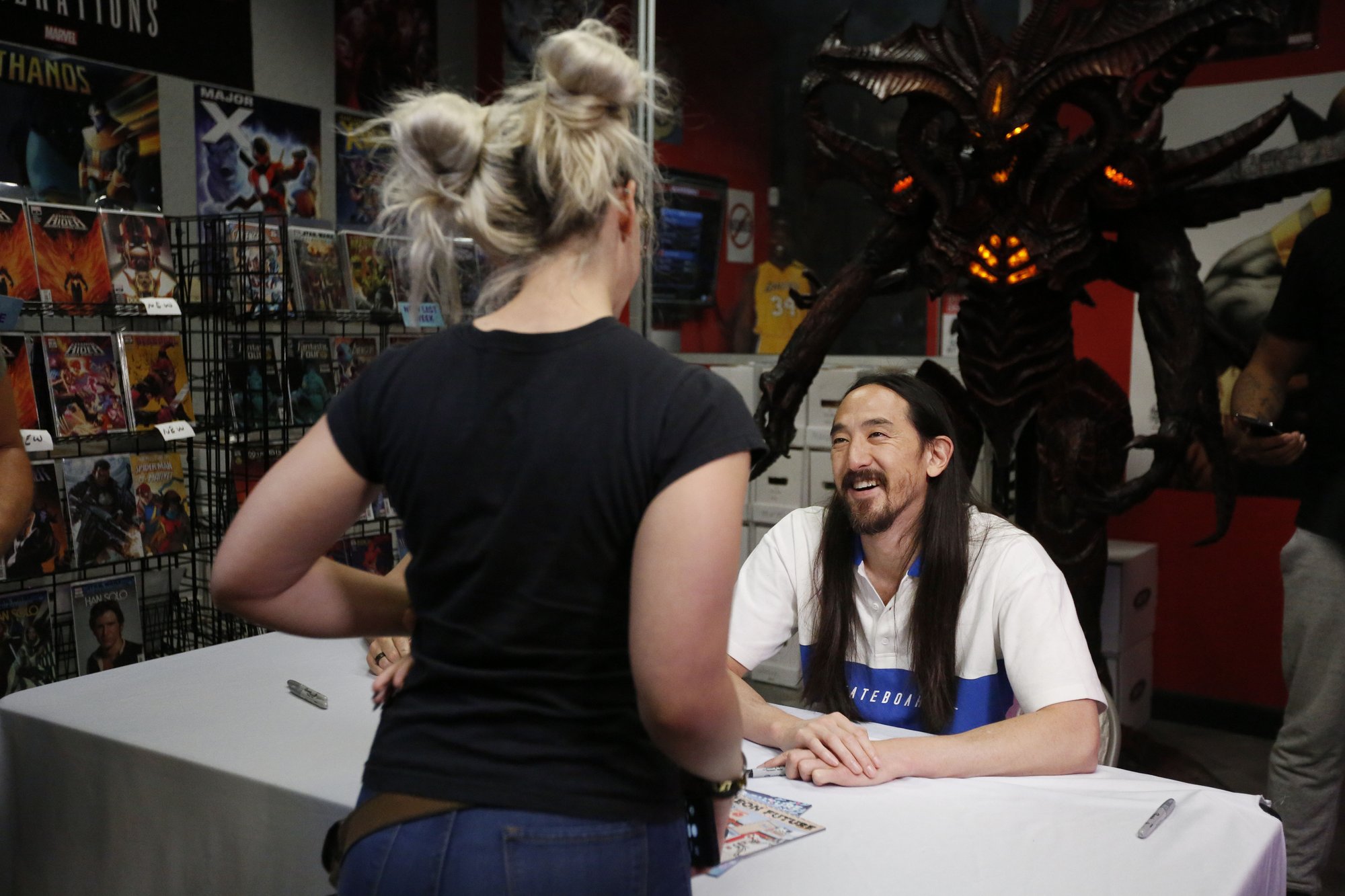 Although science fiction narratives commonly depict cybernetic machines turning on their human masters, as in “The Terminator” or “The Matrix,” Aoki doesn’t buy it.

“A general plot is that technology is destroying humanity,” Aoki said. “The robots are going to make us their slaves, or the human species is going to be exterminated by technology. But in this case, we are going to become augmented. ... We use technology for the good. It’s a different kind of story.”

″Neon Future ” is set roughly 30 years from now in a United States that has outlawed advanced technology. A civil war is brewing between people who have integrated technology into their bodies and those who have not. The resistance movement, Neon Future, is led by a longhaired, bearded, Asian-American man named Kita Sovee — whose name happens to be an anagram of Steve Aoki. The series follows an anti-tech crusader who dies and is resurrected by a technology developed by Aoki’s character.

“I believe that technology will merge with us,” Aoki said. “I believe that at the end of the day, we will all become the robots. We will become cyborg beings where we can have superhuman qualities with the technology.”

Aoki said he liked the idea of having a character in the comic who’s loosely based on him but not the primary protagonist. With two sides at war, Kita Sovee fights for a third way — a path of coexistence.

“He’s the kind of the character that I would strive to become,” Aoki said.

Aoki came up with the term Neon Future in 2014. He’s used it in the title of three of his five studio albums, with “Neon Future” IV set to release later this year.

“Neon Future as a concept deserved an illustrative storytelling piece,” Aoki said. “A piece that can paint the picture of what the Neon Future really means.”

“Before I got into music even, comics were my go-to,” Aoki said. He was also a huge fan of Japanese animated films like “Ghost in the Shell,” and even joined an anime club in college.

“I’m obsessed with future science technologies,” Aoki said. “Before I was a science fiction guy, I was a comic book guy. That’s where imagination comes from.”

“Neon Future” is the first comic series produced by Impact Theory. Founder and CEO Tom Bilyeu said Aoki and his team were clear that they didn’t want a series about a fictionalized version of Aoki going on adventures in some high-tech fantasy world or a marketing tool to promote his musical career. The top priority was creating a story that would appeal to comic fans.

“They did not want to be beholden to Steve’s image as a person, the way that people think about him,” Bilyeu said. “We thought of him as an actor. Imagine if Steve Aoki were cast as this character Kita Sovee.”

Bilyeu was doing research and preparing to interview Aoki for a web series in 2017 when he realized Aoki shared his sense of “techno-optimism” and concluded Aoki might be the perfect partner.

“I realized that in real life he plans to be cryogenically frozen when he dies,” Bilyeu said. “And I just thought that was so incredible, and I have a personal obsession with the possibility of living forever.”

He eventually pitched the idea of creating a comic book world around Aoki’s “Neon Future” album series and then met with award-winning comic writer Jim Krueger to help bring their ideas to life.

Krueger, who’s worked for DC and Marvel, said he initially expected just to give Bilyeu an overview of the comic industry.

“And then it just became fun from there,” Krueger said. “He started telling me about his ideas. I started telling him about my ideas, and it was kind of like, all business aside, really just two creators coming together and having the fun of beginning to create together.”

The group is committed to an initial six-issue story arc with plans for at least two more six-issue arcs, depending on its success.

“I hope there’s appetite for it,” Bilyeu said.

Apparently there is. The first issue, which debuted last year, sold out at stores, he said. “Neon Future” is available at Comixology and Impact Theory’s official website .

The stories are being written so that each six-issue arc will eventually be released as a graphic novel, Krueger said.

Bilyeu said he could imagine exploring other characters, and even adapting the material for a live-action television series or film.

“The more we work on it, the bigger the world gets,” Bilyeu said.