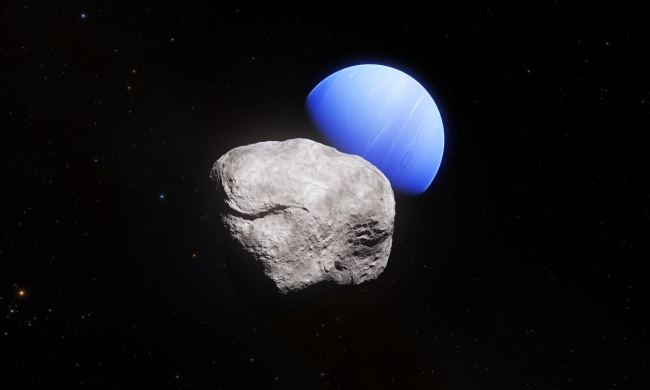 A handout released on February 20, 2019 shows an artist's impression of the outermost planet of the Solar System, Neptune, and its small moon Hippocamp. Hippocamp was discovered in images taken with the NASA/ESA Hubble Space Telescope. Whilst the images taken with Hubble allowed astronomers to discover the moon and also to measure its diameter, about 34 kilometres, these images do not allow us to see surface structures. (Photo: AFP)

Neptune's newest and tiniest moon is probably an ancient piece of a much larger moon orbiting unusually close.

In the journal Nature on Wednesday, California astronomers shine a light on the 21-mile-diameter (34-kilometer-diameter) moon Hippocamp, named after the mythological sea horse.

The SETI Institute's Mark Showalter discovered Neptune's 14th moon in 2013, using Hubble Space Telescope images. Showalter and his research team theorize Hippocamp was formed from debris created billions of years ago when a comet slammed into Proteus, the largest of Neptune's inner moons. The two moons orbit just 7,500 miles (12,000 kilometers) apart and were likely even closer in the past before Proteus migrated outward.

Scientists have long believed Neptune's inner moons were repeatedly broken apart by collisions with comets, according to Showalter.

"The discovery of Hippocamp, orbiting so close to the much larger moon Proteus, provides a particularly dramatic illustration of the Neptune system's battered history," Showalter said in an email.

While the researchers said they cannot rule out the possibility that Hippocamp is unrelated to Proteus, the moon's "tiny size and peculiar location" support their formation theory.

Discovered by NASA's Voyager 2 spacecraft in 1989, dark and irregularly shaped Proteus is Neptune's second-largest moon, measuring about 250 miles (400 kilometers) across. The biggest is Triton.

Voyager 2 beamed back pictures of a massive impact crater on Proteus. Thanks to Hubble, "now we know that a little piece of Proteus got left behind and we see it today as Hippocamp," Showalter said in a statement.

With two moons so close together, a big one like Proteus normally would knock a little one like Hippocamp right out of orbit or swallow it.

Showalter said he's searched for more little moons around Neptune, using Hubble observations. He wouldn't be surprised if there are more, but noted it will take a spacecraft in orbit around Neptune to find them.

The SETI Institute, which seeks to explore and understand life in the universe, is based in Mountain View, California.