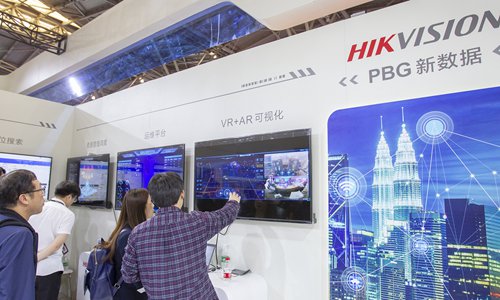 A view of Hikvision's stand during the Shanghai Security Expo held in May 2019.  (Photo: VCG)

Chinese technology companies that have just been blacklisted by the US said the ban will have a limited impact because they are prepared to guarantee supply while strengthening independent research and development.

China's National Anti-Terrorism Leading Group strongly condemned the US for blacklisting Xinjiang public security organs and other institutions and urged the US to immediately correct the mistake, revoke the wrong decision and stop interfering China's internal affairs.

The Trump administration said on Monday (US time) that it had added 28 Chinese organizations to a blacklist because of concerns over their roles in human rights violations in Northwest China's Xinjiang Uyghur Autonomous Region, according to the US Commerce Department.

The move prevents the Chinese entities from buying US products.

During a conference call on Wednesday, Dahua President Li Ke said the company is basically able to guarantee continued supplies as it had earlier drawn up replacement plans for components that were likely to be put on the list.

Hikvision said on Wednesday that it would face some short-term fluctuations but "the impact is limited in the long run."

IFlytek said on Tuesday that its inclusion on the list will not have a significant impact on daily operation. "We have plans for this situation and will continue to provide customers with qualified products and services."

The new US ban will not affect the Chinese companies in the long run because it is not hard for them to find replacements from domestic or other foreign suppliers, Fu Liang, a Beijing-based telecom industry expert, told the Global Times on Wednesday.

"The US decision is like making competitors for US companies instead of restricting Chinese ones," he said. What matters is that the Chinese technology companies are inclined to rely on their own efforts.

"If possible, we can design chips by ourselves, and we will increase investment and research and development in basic equipment," Huang Fanghong, senior vice president of Hikvision, said during a corporate conference call on Wednesday.

Xiamen-based Meiya Pico, which is also on the blacklist, said the main supporting hardware products purchased by the company are highly replaceable and most of its suppliers and clients are from China.

Meiya noted that most of its software products are self-developed and overseas sales account for no more than 1 percent of total revenue.

The US alleged that entities on the blacklist are involved in carrying out China's campaign of high-technology surveillance.

Insiders said that the US claim lacks a factual basis and the proper use of facial recognition technology and video monitors in urban management is a global trend.

China's video surveillance sector is increasing its presence in the global market thanks to cost-effective products and strong supply capacity, with some producers taking a leading role, industry insiders told the Global Times.

Chinese surveillance camera exports mainly go to countries and regions in Europe, the Middle East, Africa and the Americas, insiders said, noting that Russia is one of the major export markets for Chinese camera products.

By 2021, China will account for 38 percent of the global market and will be larger than the North American and West European markets combined, according to a forecast by IHS Markit.