New chip is brain for bikes as AGI creeps ever closer 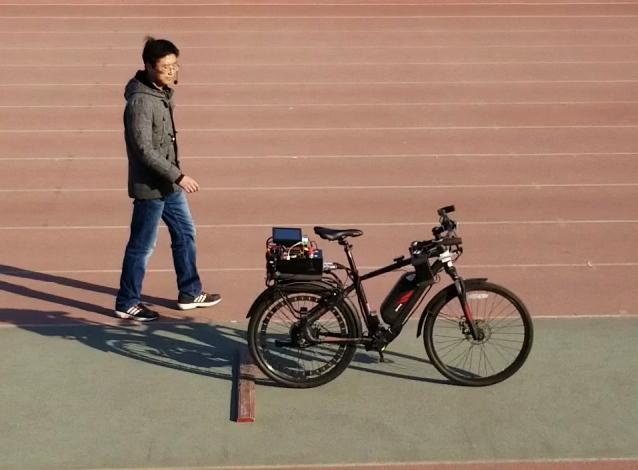 A scientist shows off a bicycle equipped with the Tianjic chip. [Photo/China Daily]

Chinese scientists have unveiled an autonomous bicycle that can steer itself, avoid obstacles and respond to voice commands thanks to a newly developed chip called Tianjic that acts as the brains of the bike.

The chip combines computer science-based machine learning and brain-inspired approaches and is believed by the research team to be the next step forward in the achievement of artificial general intelligence, or AGI, which refers to a machine's ability to learn any intellectual task that a human being can.

"Using just one chip, we can demonstrate the simultaneous processing of versatile algorithms and models in an unmanned bicycle system, realizing real-time object detection, tracking, voice control, obstacle avoidance and balance control," Shi Luping, along with his colleagues at the Center for Brain Inspired Computing Research at Tsinghua University, wrote in a paper published in the journal Nature on Wednesday.

"Our study is expected to stimulate AGI development by paving the way for more generalized hardware platforms," they said.

The researchers also provided a video demonstrating how the bike works. In the video, the bike responds well to spoken orders to turn left and speed up, and can autonomously detect and avoid obstacles and track objects.

AGI has long been considered a grand dream in the field of artificial intelligence and many organizations worldwide are conducting active research on the subject, including the Machine Intelligence Research Institute and OpenAI based in the United States.

Conventional AI technology achievements, such as robots, automated vehicles and facial recognition, are propelled by machine learning algorithms after analyzing a massive amount of data. But if machines are to behave more like their human creators, new types of computer hardware are required.

According to Synced, China's first platform dedicated mainly to the AI industry, researchers around the world have either used computer science-based approaches or neuroscience modalities in pursuit of AGI.

However, the two systems each have their own unique and incompatible platforms which made progress slow and difficult, so the Tianjic chip being able to bridge the two is considered "revolutionary".

The chip is also believed to demonstrate China's progress in advancing its own chipmaking capabilities, as the country has largely depended on foreign-made chips, MIT Technology Review said.