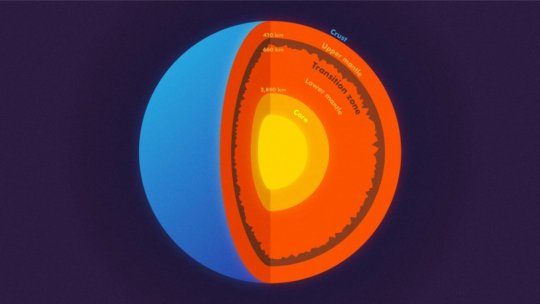 BEIJING, Feb. 16 (Xinhua) -- An international study has found mountains and other topography in a layer about 660 km underground that separates the upper and lower mantle of the Earth.

In the US journal of Science published Friday, researchers from the Institute of Geodesy and Geophysics, Chinese Academy of Sciences, the California Institute of Technology, Princeton University and other research institutions reported that they used powerful waves generated by a magnitude 8.2 earthquake, the second-largest deep earthquake ever recorded that shook Bolivia in 1994, to peer deep into the Earth.

The Earth has three layers -- the crust, mantle and core. Big earthquakes first impact the mantle, sending shockwaves traveling in all directions through the core to the other side of the planet and back again, providing valuable data for geoscience research.

As light waves bounce off a mirror or bend through a prism, earthquake waves can also reflect or refract when they encounter any roughness or boundary traveling through rocks below our feet.

Their statistic models show that the scattering earthquake waves encountered a boundary 660 km within the Earth. It is a stronger and rougher topography than the surface layer that people live on, and there is a chance that these underground mountains are bigger than anything on the surface of the Earth.

Meanwhile, the roughness wasn't equally distributed as the crust's surface has ocean floors and mountains.

According to the researchers, the presence of roughness on the 660-km boundary has significant implications for understanding how our planet formed and continues to function, providing new information to understand the fate of ancient tectonic plates which have descended into the mantle.

Christine Houser, a seismologist and assistant professor at the Tokyo Institute of Technology who was not involved in this research, said in a peer-reviewed article that the results might help answer fundamental questions about the Earth's evolution.