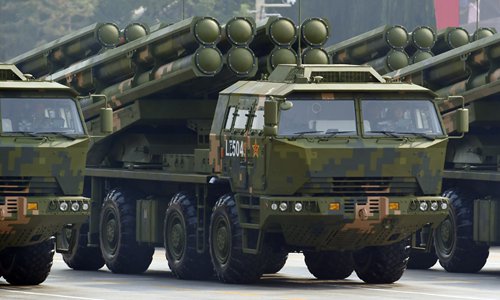 China's new multiple rocket launcher, which debuted at the National Day parade on October 1, not only fires rockets, but also tactical ballistic and anti-ship missiles, Chinese media reported, with experts saying on Monday the weapon could give the Chinese military an overwhelming advantage over enemies.

The new multiple rocket launcher, still not known by its official designation, was developed based on the PHL-03 long-range multiple rocket launcher. It uses an 8x8 wheeled high mobility chassis, weighs 45 tons, and can adapt to temperatures ranging from -22 C to 55 C, Ordnance Industry Science Technology, a Xi'an-based periodical focused on the national defense industry, reported over the weekend.

Unlike the PHL-03, which is loaded with a fixed type of ammunition, the new rocket launcher has two modularized launch cells, and each can carry different types of ammunition, the periodical said, noting that this brings versatility and high efficiency to the weapon.

The export version of the new multiple rocket launcher, the AR-3, can even switch to the 750-millimeter Fire Dragon 480 tactical ballistic missile and TL-7B anti-ship missile, the report said.

The AR-3 has a range of about 280 kilometers with rockets, and the domestic version is expected to be able to hit targets at 360 kilometers, even farther with missiles, the periodical wrote, noting that it can target high-value strategic targets like airports, command centers, supply bases, and anti-air installations.

The new multiple rocket launcher will give the People's Liberation Army an overwhelming advantage over its enemies, as it is highly mobile, easy to operate and can fire very fast, a military expert who asked not to be named told the Global Times on Monday.

It can fire across the Taiwan Straits, be deployed not only on plains but also on plateaus, and strike at naval targets, the expert said, noting that the AR-3 could be the best on the international market.