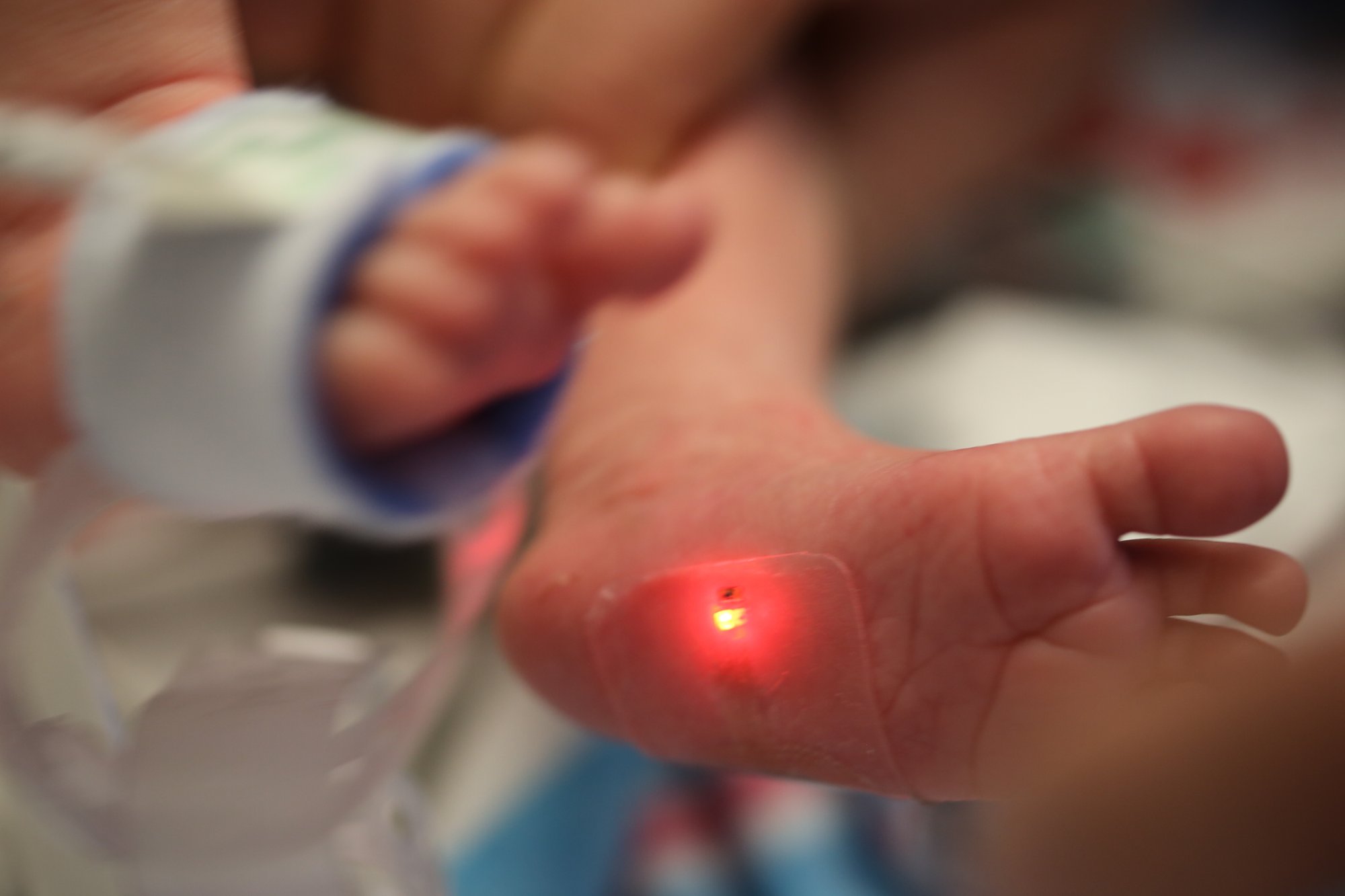 This 2019 photo provided by Northwestern University shows a soft, flexible wireless sensor applied on a foot of a family's baby, who is involved in the clinical trial at Ann & Robert H. Lurie Children's Hospital of Chicago. (Photo: AP)

Peek into any US hospital’s baby ICU, and you’ll see sick and premature newborns covered in wired monitors that tear at fragile skin and make it hard for parents to cuddle their kids.

“This need was so compelling,” said John Rogers, a Northwestern University bioengineer who led the sensors’ development. “Without the wires, it’s much easier for the parents, mothers in particular, to interact and hold their babies.”

Nearly 300,000 US newborns wind up in neonatal intensive care units each year, because they were born prematurely or with serious health problems. It’s critical to track their heartbeat and other vital signs so doctors and nurses can rapidly spot if their youngest patients are in trouble.

But today, that means sticky electrodes tethered by wires to a variety of beeping monitors that surround the incubator. The nest of wires impedes skin-to-skin contact with a parent that’s known to help preemies thrive, much less rock a baby or breast feed, said Dr. Amy Paller, a Northwestern pediatric dermatologist.

And no matter how carefully doctors and nurses remove the electrodes, preemies whose skin isn’t fully developed are prone to injuries and scarring.

Going wireless in the NICU is a lot harder than, say, measuring a jogger’s heart rate with a FitBit.

First, Rogers’ team developed ultrathin sensors made of a flexible silicone that moves like skin and clings without any strong adhesive.

Then the researchers embedded the sensors with spring-like electronics that flex as the body moves, and are waterproof and made with materials that — unlike today’s NICU monitors — don’t interfere with X-rays or MRI scans.

And key to being lightweight, they don’t need batteries. Under the crib mattress sits a transmitter that wirelessly charges the sensors much like some smartphone chargers — while simultaneously relaying all the sensors’ measurements to hospital computers.

Replacing today’s multiple monitors takes just two wireless sensors — one made for the chest or back, and one to wrap around a foot — that work together. For example, the upper sensor measures heart activity, while the foot sensor uses light to measure blood oxygen levels. How long it takes a heartbeat’s pulse to reach the foot corresponds to blood pressure, Rogers explained — no bruising blood pressure cuff required.

How reliable are they? Researchers put the wireless sensors on the bodies of 20 babies in Northwestern-affiliated NICUs who also had the normal wired monitoring. The wireless sensors worked just as well, Rogers and Paller reported Thursday in the journal Science.

“This is a promising technology and may eliminate stick-on sensors,” said Dr. Rosemary Higgins, a neonatologist at the National Institute of Child Health and Human Development, who wasn’t involved with the research.

The studies are continuing and Rogers said the sensors now have been used on about 80 babies with similar results and no sign of skin trouble.

“It’s really amazing,” said Theodora Flores, as she held one of her twin daughters, Genesis, in the Ann & Robert H. Lurie Children’s Hospital of Chicago this week. Genesis is part of the wireless testing and the new mom said fewer wires would mean, “I can move freely with her a little bit more.”

It would take far more testing for Food and Drug Administration approval of wireless sensors.

But Rogers said the bigger need is in developing countries that can’t afford today’s wired monitoring even for preemies. He estimates the new sensors could be made for about $10 to $15. With funding from the Bill and Melinda Gates Foundation and Save the Children, Rogers is preparing for a pilot trial of the wireless sensors in Zambia in April, with the goal of testing up to 20,000 sensors in India, Pakistan and Zambia by year’s end.

The technology “has great potential impact on monitoring practices all over the world and may give many neonates a more equitable opportunity to survive,” Dr. Ruth Guinsburg of the Federal University of Sao Paulo, Brazil, wrote in a commentary in Science.