Did you hear what happened when Bill Gates walked into a bar? Everybody there immediately became millionaires — on average. 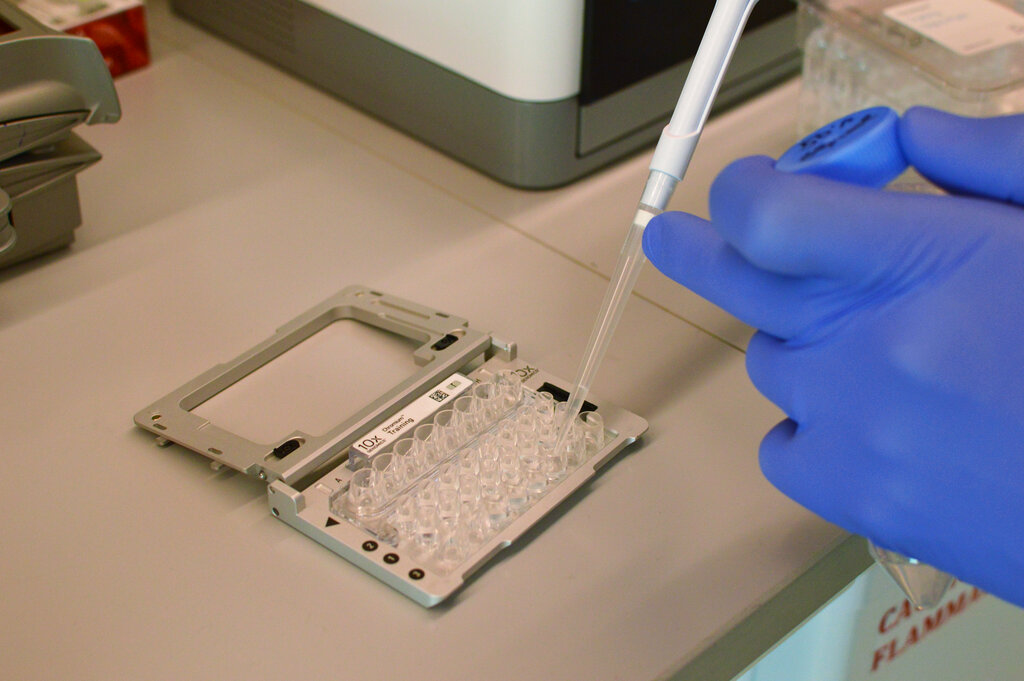 That joke about a very rich man is an old one among statisticians. So why did Peter Smibert use it to explain a revolution in biology?

Because it shows averages can be misleading. And Smibert, of the New York Genome Center, says that includes when scientists are trying to understand the basic unit of life, the cell.

Until recently, trying to study key traits of cells from people and other animals often meant analyzing bulk samples of tissue, producing a mushed-up average of results from many cell types. It was like trying to learn about a banana by studying a strawberry-blueberry-orange-banana smoothie.

In recent years, however, scientists have developed techniques that let them directly study the DNA codes, the activity of genes and other traits of individual cells. The approach has become widely adopted, revealing details about the body that couldn't be shown before. And it has opened the door to pursuing an audacious goal: listing every cell type in the human body.

"Single-cell analysis is crucial for a comprehensive understanding of our biology and health," Dr. Francis Collins, the director of the National Institutes of Health, declared recently.

In fact, the journal Science named the techniques that allow single-cell tracking of gene activity over time in developing organisms and organs as its "breakthrough of the year" for 2018. Its announcement declared, "The single-cell revolution is just starting."

A SLEW OF DISCOVERIES

Even complicated animals like us are really just massive communities of cells, each taking on a particular role and working with its neighbors. An average adult human has 37 trillion or so of them, and they're surprisingly varied: the inner lining of the colon, for example, has more than 50 kinds of cells.

It was just five years ago that methods for decoding of DNA and its chemical cousin RNA from individual cells became broadly accessible, according to the journal Nature Methods. New techniques are still being developed to pry more and more secrets out of individual cells.

The single-cell approach is leading to a slew of discoveries. In just the past year, for example:

— Scientists closely tracked gene activity within fish and frog embryos, a step toward the longstanding goal of understanding how a single fertilized egg can produce an animal. One study compiled results from more than 92,000 zebrafish embryonic cells.

— Other researchers revealed details of the physical connection between pregnant women and the fetus, giving potential clues for understanding some causes of stillbirth.

— A study found a pattern of gene activity in some melanoma cells that let them resist immunotherapy, the practice of unleashing the body's immune system on cancer. That might lead to finding a way to render those cells vulnerable.

And a pair of other studies may affect research into cystic fibrosis, the genetic disease that causes lung infections and limits breathing ability. Scientists have long known that the disease stems from a faulty version of protein called CFTR. The studies identified a type of rare cell in the airway that makes large amounts of CFTR, surpassing earlier but only dimly understood indications that such cells existed.

The discovery offers great potential for guiding the development of new treatments, said Dr. William Skach, senior vice president of research affairs for the Cystic Fibrosis Foundation. Single-cell techniques will be important in studying them further for coming up with new therapies, he said. (Two co-authors of one paper are from the foundation).

At the MD Anderson Cancer Center of the University of Texas, Nicholas Navin uses single-cell DNA studies to reveal different patterns of mutations in various cells of a single tumor. That lets him reconstruct when and where those mutations appeared as the tumor evolved from benign cells. And he can identify cells that contain combinations of mutations that make them the most lethal.

Someday, such research should indicate what treatments to use for particular patients, or which patients have the highest risk of the disease progressing, he says. It might also allow doctors to check how well their treatments are working against a cancer over time. A decade or two from now, it might let doctors detect cancers very early by picking up and analyzing the DNA of rare cells in blood tests, he says.

MAPPING ALL THE CELLS

Meanwhile, the ability to produce single-cell results for hundreds of thousands of cells at a time has opened the door to a huge effort to catalog every cell type in the human body. More than 1,000 scientists from 57 countries have joined the Human Cell Atlas Consortium , which estimates it will eventually profile at least 10 billion cells found in both healthy and sick people.

Why do this? It's a natural follow to the big project that catalogued all the human genes, says co-organizer Aviv Regev, a biology professor at the Massachusetts Institute of Technology and researcher at the Broad Institute of MIT and Harvard. (Her salary is paid by the Howard Hughes Medical Institute, which also supports The Associated Press Health & Science Department.)

The gene map led to identifying thousands of genetic variants that raise or lower the risk of many diseases. But to turn that into therapies, scientists have to know in which cells those variants act, she said. And to run down those cells in the human body, "we have to map all of them."

Some cells are rarer than others, but these can be just as critical for a functioning body as their more plentiful neighbors, she said.

She hopes for a first draft of the cell atlas in about five years, focused on certain organs and tissues of the body. To finish the job might take about a decade, she figures. Regev won't hazard a guess about how many cell types will be found for the entire human body.

"This is not going to cure all disease immediately," she said, but "it is a critical stepping stone."