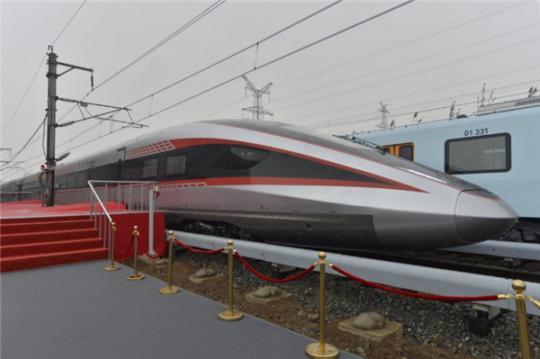 A photo captures the new type of high-speed train which is rolled out in Changchun, the capital city of Northeast China's Jilin province, on Oct 21. (Photo provided to chinadaily.com.cn)

A new generation of high-speed trains that can adapt to different track gauges, or widths, and climate conditions has been developed in Changchun, Jilin province.

The new type of train, developed by CRRC Changchun Railway Vehicles Co, is designed with a top speed of 400 kilometers per hour. Its ability to run on international railways with different track gauges and power supply standards makes international rail travel much more practical.

Wang Lei, a senior engineer at the company, said different global gauge standards have been one of the biggest challenges holding back cross-border interconnections among different rail routes.

When ordinary trains pass through countries with different gauges, the train cars have to be lifted so that their wheel assemblies can be replaced at border stations, which takes at least two hours, not including the time and effort needed to work out any problems, he said.

Since the new train has variable-gauge wheel assemblies, it enables the cars to be pulled along a different gauge track at reduced speed, which improves the efficiency of rail services and facilitates the smooth flow of traffic, he added.

The train also features increased adaptability to environmental changes. It can operate in temperatures between -50 C and 50 C, the company said. The train's new technologies mean it can be used on about 90 percent of the global railway network.

The new train also is more environmentally friendly, reducing average energy consumption per kilometer by 10 percent as well as cutting noise levels by two decibels, according to the company.

Based on the prototype train and its technology, the company is ready to take orders for customized high-speed trains in line with the technical standards and operational requirements of different parts of the world.

In addition to the CRRC's Changchun operation, with its focus on Russia, the company's other operations in Qingdao, Shandong province, and Tangshan, Hebei province, have also been carrying out research and development on the new train targeting the needs of European and Southeast Asian markets, respectively.