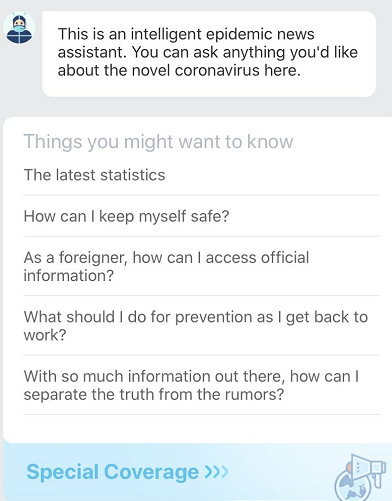 An intelligent newsbot, which can answer questions about the novel coronavirus in English, was launched recently on China Daily's App, an app which has been downloaded nearly 30 million times around the world, and leverages the global mobile platform to deepen the public's understanding about the epidemic.

Users can learn about novel coronavirus by chatting with the robot. This includes the latest information on the epidemic and how to control and prevent the disease.

The robot was developed by Zhuiyi Technology, an artificial intelligence startup headquartered in Shenzhen, Guangdong province. Zhuiyi began to develop bilingual AI robots for epidemic control and prevention services since the Spring Festival.

"The technology is mature. It only takes time to construct a related knowledge database by our AI bot trainer. Now we provide epidemic-related service robots to more than 200 companies and public service agencies around China," said Sheng Hao, Zhuiyi's head of marketing.

The iSmart robot is based on Zhuiyi's core technologies. It can identify questions related to the epidemic through a database built on authoritative official information. The application of deep learning technology enables it to evolve and provide accurate information by more interactions with human beings.

"No one wants the epidemic, but it provides many opportunities for AI innovation such as robots employed in medical treatment and disinfection. People quarantined at home have great demand for digital technology such as online lessons, telecommuting and teleconference," said Li Shipeng, deputy president of the Shenzhen Institute of Artificial Intelligence and Robotics for Society.

Founded in March 2016, the core technologies of Zhuiyi are deep learning and natural language processing in artificial intelligence. This allowed it to garner millions of dollars from angel investors.

In 2016, Didi Chuxing Technology Co, a major mobile transportation platform in China, was looking for a partner that can provide it with intelligent customer services.

After learning about this, Zhuiyi founder and CEO Wu Yue contacted Didi for the chance to test its technology against its competitors.

After months of tests, the robot named Yibot provided by Wu's company matched 90 percent of replies correctly with the questions of customers. This was enough to defeat all other competitors and help the startup win Didi's contract.

Yibot has developed into one of the first AI robots that applies virtual robot technology featuring deep learning abilities in the customer services sector. The cooperation with Didi helped Zhuiyi find its core competence in providing smart solutions in that sector.

The deep learning technology means the robot can effectively build up its learning curve through constant interaction with human beings, making communications more efficient and friendly to users.

In 2017, Zhuiyi received an investment from Kai-Fu Lee, an iconic venture investor who was impressed by its "technological feasibility" and it was the only natural language processing AI project he chose to fund.

Lee said that deep learning is the foundation for a breakthrough in AI technology.

The AI robots made by the company can reach 97 percent accuracy in understanding and responding to communications with humans.

The firm has thrived and has become a player that peers could not afford to neglect in its niche market. Its robots are widely used in financial institutions, internet companies, retail and manufacturing industry.

Its list of clients includes major companies such as China Merchants Bank, Ctrip, Mercedes-Benz, China Mobile and Gome. "About half of the top 500 banks and insurance companies in China are our customers," said Wu.

Zhuiyi is now focusing on the next generation of intelligent interaction. It is committed to providing enterprises with multi-tasking AI digital employees that can handle more duties apart from customer service.

"At present, we provide more than 50 types of digital employees. They can engage in intelligent customer services, marketing, training, data analysis and operations," Wu said. The company has more than 300 customers that are leaders in their respective industries.