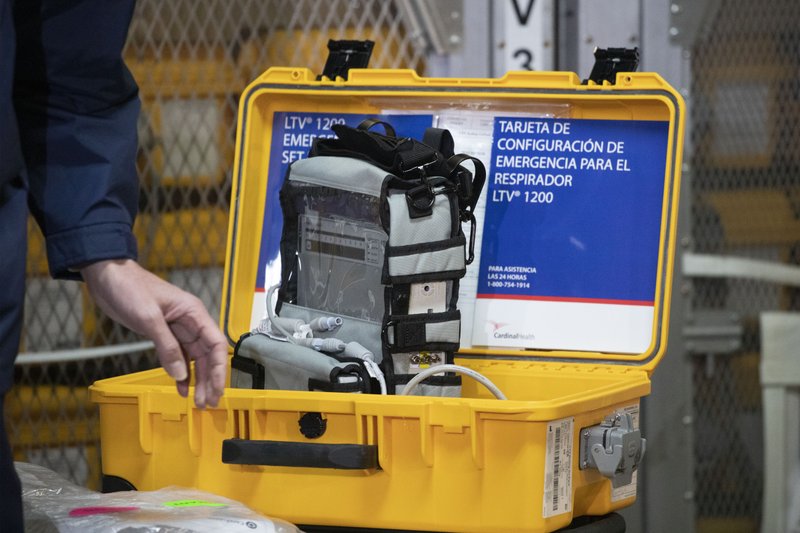 In this March 24, 2020, file photo a ventilator is displayed during a news conference at the New York City Emergency Management Warehouse, where 400 ventilators have arrived and will be distributed. As hospitals scour the country for scarce ventilators to treat critically ill patients stricken by the new coronavirus, pharmacists are beginning to sound an alarm that could become just as urgent: Drugs that go hand in hand with ventilators are running low even as demand is surging. (Photo: AP)

As hospitals scour the country for scarce ventilators to treat critically ill patients stricken by the new coronavirus, pharmacists are beginning to sound an alarm that could become just as urgent: Drugs that go hand in hand with ventilators are running low even as demand is surging.

Michael Ganio, of the American Society of Health-System Pharmacists, said demand for the drugs at greater New York hospitals has spiked as much as 600% over the last month, even though hospitals have stopped using them for elective surgery.

“These ventilators will be rendered useless without an adequate supply of the medications,” Society CEO Paul Abramowitz said in an April 1 letter to Vice President Mike Pence, who is leading President Donald Trump’s coronavirus task force.

Nationwide, demand for the drugs surged 73% in March, according Dan Kistner, a pharmaceuticals expert at Vizient, Inc., which negotiates drug prices for hospitals throughout the country. Supplies, according to Vizient data, have not kept pace.

“Trying to run the ventilators without these drugs will be like trying to operate a fleet of cars without gasoline,” Kistner said.

To date, no hospital has reported being unable to put a patient on a ventilator due to a lack of those drugs, said Soumi Saha, a pharmaceuticals expert at Premiere, Inc., which also negotiates drug prices for hospitals.

When clinicians put critically-ill patients on ventilators, they generally rely on three categories of drugs: sedatives, pain killers and, at times, paralytics.

“You have a tube basically down your throat to help you breathe,” explained Chris Fortier, the chief pharmacy officer at Massachusetts General Hospital. “We need medications to sedate you and treat your pain, and sometimes to even give you some paralysis so that you’re not pulling on that ventilator and damaging your lungs.”

The demand is surging because hospitals across the country are trying to stock up at the same time, said Erin Fox, director of the drug-information service at University of Utah Health, which runs five hospitals.

“I’m just terrified that we’re not going to have the medicines we need,” Fox said. “It keeps me up at night.”

Fortier said adequate supplies of the drugs are also being stretched because COVID-19 patients typically stay on ventilators from 10 to 14 days, which is longer than typical patients.

At the moment, supplies are not critically low at Mass General, Fortier said, but the concern is so great that hospital staffers are monitoring supplies around the clock. “We have a team looking at it, hour-by-hour, seven days a week,” he said.

If supplies run out, specialists said, doctors have other options — drugs that may not be their first choice, or drugs unavailable in doses they prefer. Using them could increase the risk of medication error or take more time to administer at a time when clinicians are racing to treat as many patients as possible.

“Fentanyl comes in different sizes,” Kistner said, describing a situation where clinicians might have to use several smaller doses for a single patient if larger doses are not at hand. “That would be a lot of work and very inefficient.”

The specific drugs running low include the opioid painkillers fentanyl, morphine, and hydromorphone; the sedatives midazolam and propofol; and the paralytics pancuronium, rocuronium, and succinylcholine, according to the letter the ASHP sent to Pence.

Already, the U.S. Drug Enforcement Administration has announced it is raising its 2020 ceiling for opioid production by 15% and is approving drugmaker requests for higher limits, often within a day.

Pfizer, a top maker of injectable drugs, is one of several U.S. drugmakers covered by the new quotas, and is ramping up production of fentanyl, morphine, hydromorphone and other medicines for ventilator patients, according to company spokeswoman Kimberly Bencker.

“For many of these critical medicines, we have ample supply. For some, the unprecedented surge in demand for these products is limiting our ability to fully satisfy customer orders in the short-term,” Bencker said.

The Houston-based company aims to make two to three times its normal volume of those drugs while manufacturing extra sedatives and paralytic drugs, plus one to boost blood pressure in COVID-19 patients, said Jenkins.

Even before the coronavirus pandemic, some of the drugs were already in short supply because profit margins for generics are relatively low and, consequently, some manufacturers have stopped producing them.

What’s more, because the drugs are injectables, they must undergo sterility tests, a process that can take weeks. “You can’t say, ‘Hey, we’re going to make more of these drugs’ and have them here tomorrow,” Kistner said.

That’s why some pharmacists fear the shortages may get worse before they get better. Said Fortier: “This is going to get bigger as we move forward over the next couple of weeks.”