On hearing that they had been awarded a Nobel Chemistry Prize for their groundbreaking work on gene-editing, Jennifer Doudna and Emmanuelle Charpentier said they hoped it would inspire a new generation of women in science. 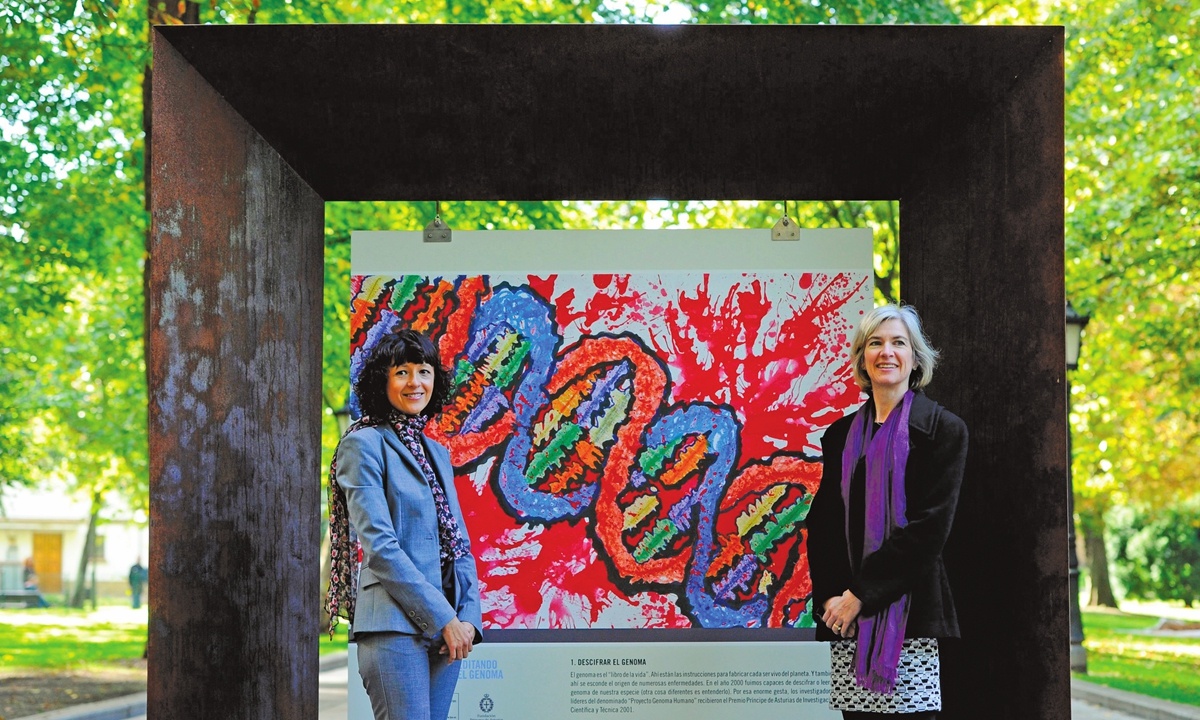 French researcher Emmanuelle Charpentier (left) and US professor Jennifer Doudna pose beside a painting made by children of the genoma at the San Francisco park in Oviedo, Spain. Photo: VCG

Charpentier and Doudna are the first all-woman team to receive a Nobel science prize and become the sixth and seventh women to be honored for their research in chemistry since the first awards in 1901.

Pernilla Wittung Stafsheden of the Royal Swedish Academy of Sciences, which is responsible for selecting the Nobel laureates in chemistry, said the prize to two female laureates was "a historic moment."

The Nobel is for the pair's development of CRISPR-Cas9, a tool that allows scientists to snip DNA and edit the genetic code of animals, plants and microorganisms.

The scientists said they hoped that the Nobel recognition would also help light up a path for young women entering a field still dominated by men.

"My wish is that this will provide a positive message to the young girls who would like to follow the path of science, and to show them that women in science can also have an impact through the research that they are performing," Charpentier said.

Doudna told reporters that it was "great for especially younger women to see this and to see that women's work can be recognized as much as men's."

"I think for many women there's a feeling that no matter what they do their work will never be recognized as it might be if they were a man," she said.

"And I'd like to see that change, of course, and I think this is a step in the right direction."

Their comments echo those of Andrea Ghez, who said she hoped to "inspire other young women into the field" on Tuesday after receiving the physics Nobel prize in a joint award with Roger Penrose and Reinhard Genzel for their work on black holes.

Ghez is only the fourth woman to be awarded a physics Nobel since Marie Curie received it in 1903.

The awards won praise from scientists for recognizing achievement and helping to change perceptions of what eminent scientists look like.

"I absolutely agree that both Charpentier and Ghez will be role models for young women in Science because then it becomes more 'normal' to see women winning these prizes and for younger scientists not to think that this is the domain of an old white man," Roisin Owens, biochemical engineer at University of Cambridge, told AFP.

But she said she hopes that soon there would "be such diversity in gender and race" that it is no longer a talking point.

Charpentier from France discovered a molecule that disarms viruses by snipping off parts of their DNA while researching a common bacteria.She published her research in 2011.

She then worked with Doudna to recreate the bacteria's genetic scissors.

Reacting to the prize on Wednesday, scientists underscored the enormous impact of their work.

Alena Pance, at The Wellcome Sanger Institute, said it was an "absolute pleasure to see two very accomplished women to receive the highest Prize in science," adding that the impact of CRISPR technology on research and medicine was "astounding."

James Turner, of the Sex Chromosome Biology Laboratory at the Francis Crick Institute, said the Nobel was a "triumph" for women in science.

"Thanks to their discoveries, genetic modification experiments that previously took us years to complete can be achieved within weeks," he said.

The practice of genome editing is "revolutionizing biomedical research and the discovery of new medicines with huge potential for the future health of patients," said Robert Lechler, president of the Academy of Medical Sciences.

"Thanks to the work of these two world leading scientists we are starting to understand the role of genes in biology and disease and laying the foundations for developing targeted medicines for genetic conditions."

Others said the prize highlights the continued obstacles faced by young women in science, underlining the importance of giving credit to those who reach the pinnacle of their fields.

"It is a fact that we note, in the labs we see that women are far less highly regarded than men," she told AFP.

Fatima Tokhmafshan, a geneticist and bioethicist at the Research Institute of the McGill University Health Centre in Canada, said she collected magazine clippings of interviews with Charpentier and Doudna when she was studying how to use CRISPR.

She said it can be "demoralizing" for young women students when they learn of historical female researchers whose work went unrecognized or was "overshadowed by a male figure."

Owens said that sharing awards between researchers also comes at a time of calls for science to be more collaborative.

"I believe that research culture would improve if we were to reward teams and this may end up resulting in more prizes for female team members, known to be more community minded," she said.