TECH Nothing artificial in a new age of intelligence

Nothing artificial in a new age of intelligence 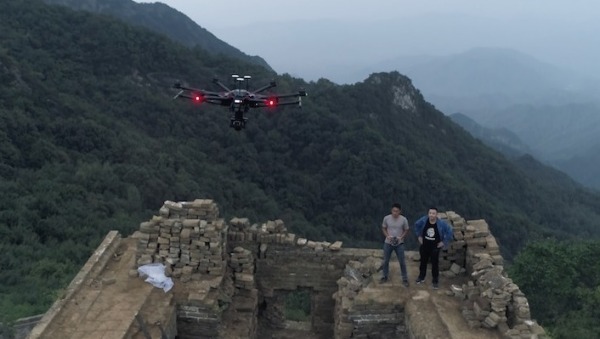 With an AI algorithm devised by Intel and Wuhan University, engineers can easily detect cracks on the Great Wall and have them repaired. (Photo provided to China Daily)

There have been different ages for mankind, stone and bronze to name just two. We are now, as a species, on the foothills of a new age, that of artificial intelligence and as the name implies, it is helping us solve various quandaries as shown in a documentary.

Hello AI is a cheerful welcome to a new guest in our lives. Spanning five episodes, the series on the online streaming media platform Youku showcases how AI can make our lives better.

From restoration of the Great Wall, protection of the Siberian Tiger and raising yaks to space exploration, Hello AI takes audiences to travel around the world with touching stories involving AI. The crew spent 18 months interviewing 77 people.

"We did not want another production of 'hard' scientific technology," Chen Yi, director of Hello AI, says at a pre-screening of the documentary in Beijing on Thursday. "We wanted to create something warm to highlight AI's benefits for humanity."

The documentary focuses on the technology's many uses, not least on the Great Wall on the outskirts of Beijing. Restorers used to have to climb treacherous cliffs to survey a "wild and very dangerous" section of the structure. But drones are now being utilized.

And with help of an AI algorithm, co-processed by tech company Intel and Wuhan University, engineers can easily detect cracks on the wall, and are able to accurately calculate how many bricks are needed for restoration through virtual modeling.

Another example shows the UNESCO World Heritage site at Mogao Caves, a collection of 735 grottoes spanning more than a millennium in Dunhuang, Gansu province. Wu Jian, a researcher who has spent decades taking high-definition pictures of the frescoes, once worried his team's work was not fast enough to digitally record the gradually fading pieces of art.

It was painstaking work. His team had to take 300 pictures of a square-meter area, and put the "puzzles "together in postproduction. It often took one month to finish the digitization of just one cave. Time was of the essence and an AI team from Zhejiang University was able to instantly build a picture mosaic. This digital exhibition of the treasure of Mogao Caves has toured the country.

The common theme running through the series is "Tech for good".Liu Yile, an executive director of the documentary, says they only choose cases that can "reflect the relationship between scientific technology and people".

It is not just ancient structures or outer space where AI benefits us all. In culture too, it can play a vital role. Deng Chunlei, an IT engineer who is of the Manchu ethnic group, regrets that he cannot fluently speak the Manchu language. Just about 20 people, he claims, can speak it throughout China. To help preserve it, he has recorded a 10-hour discussion with a 91-year-old Manchu woman. His team, with tech company iFly Tek, uses AI to analyze the woman's voice and gather 2,500 basic sentences of the language.

"Technology is at its best when it is widely and cheaply accessible," he says. "A boom time for AI has just started, but has room for improvement to meet our expectations. That needs our continuous exploration."

According to Zhang Yanli, a scholar with Doc China, the sector's leading association of documentary production companies, the new series is the first Chinese documentary with 8k ultra high definition and the first such production in China that totally focuses on AI. He also says that Hello AI will be broadcast through TV stations nationwide later this year.

Speaking on whether AI will be used to produce documentaries in the future, Liu smiles: "It's just like comparing a handicraft or product from an assembly line. No matter how exquisite the industrial product is, people will prefer a handmade art piece.

"AI will assist us, but not replace us."

That is also probably why director Chen decides to invite her college classmate Ji Guanlin, rather than use AI dubbing, as the voice-over in the documentary. Ji is best known for the voice of lead actress in the popular historical drama Empresses in the Palace. Some things, humans are still better at.