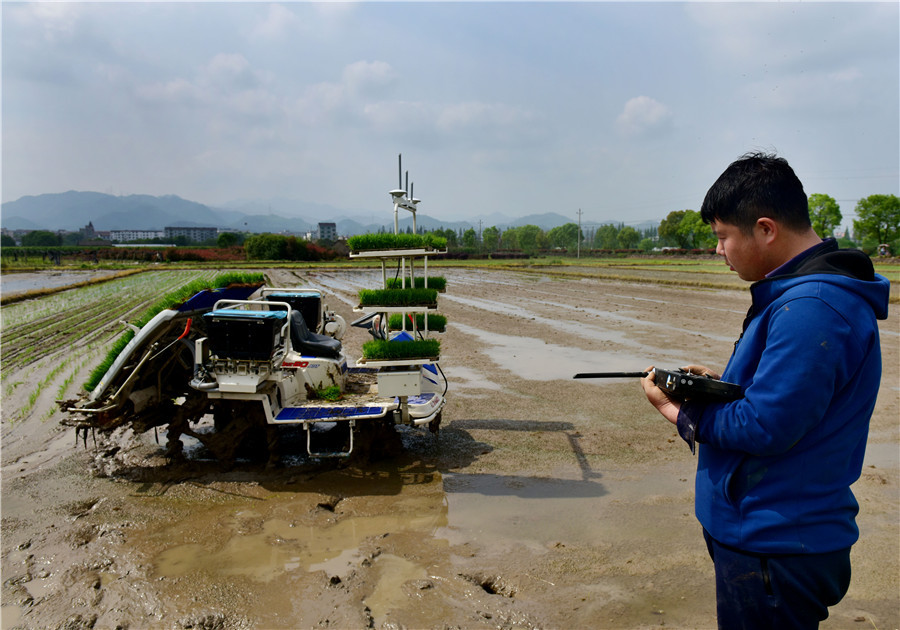 A farmer operates a driverless Beidou-guided rice planter in Wuyi, Zhejiang province, in April. The machine can plant rice seedlings covering the size of about two football fields within a day. ZHANG JIANCHENG/FOR CHINA DAILY

China has been striving to foster international cooperation in space-based navigation and positioning as well as applications for its Beidou system, said the China Satellite Navigation Office.

The Chinese government has worked with space authorities in Russia, the United States and the European Union to promote signal compatibility and frequency coordination among the Beidou, GPS,GLONASS and Galileo systems, aiming to bring more convenience and accessibility to users around the world.

Globally, by the end of 2019, Chinese products based on the Beidou system had been sold to more than 120 countries and regions, playing a helpful role in a number of public sector fields.

Beidou had by then been used in land ownership investigations, smart agriculture and intelligent construction, as well as other applications in Asia, Europe and Africa.

For instance, Beidou has helped Russia improve its electric grid inspections, made operations more convenient for unmanned aircraft users in Cambodia, boosted management efficiency of many warehouses in Thailand and facilitated construction work in Kuwait, the office added.

He Mu, general manager of Aerospace Great Wall Satellite Navigation Technology, a China Aerospace Science and Technology Corp subsidiary serving as a contractor for Beidou's overseas promotion, said that his company is in cooperation with many nations to promote the use of satellite navigation and positioning services, localize Beidou-based applications, train local professionals and inject research and development capability into local enterprises.

Foreign Ministry spokesman Wang Wenbin said at a news conference on Friday in Beijing that Beidou belongs not only to China, but also the world, and serves people all over the globe. He said Beidou now has more than 100 million users in about 100 countries and regions.

China is willing to join hands with other nations in the space field and together share development benefits, Wang said.