A rock sample collected by Apollo 14 astronauts in 1971 from the moon's surface might well be the oldest piece of the Earth, according to recent research. 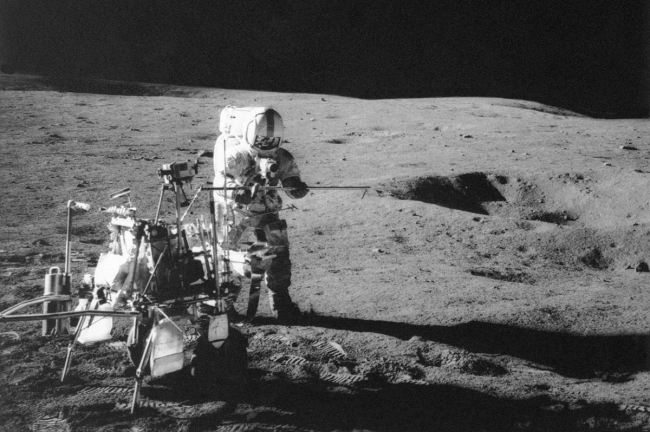 In this Feb. 13, 1971 file photo, Apollo 14 astronaut Alan B. Shepard Jr. conducts an experiment near a lunar crater, using an instrument from a two-wheeled cart carrying various tools. (Photo: NASA via AP)

The investigation of an international team of scientists revealed that the sample contains a fragment of ancient crust which scientists believe is very likely to have formed deep beneath the Earth's surface.

Published in the journal of Earth and Planetary Science Letters, the analysis found that the rock is composed of quartz, feldspar and zircon, which are very common on Earth but highly unusual on the moon.

The researchers inferred that a large comet or asteroid hit the Earth and launched the rock from earth into space, where it collided with the surface of the moon about 4 billion years ago. On the lunar surface, the rock was subsequently mixed with other materials into one sample.

"It is an extraordinary find that helps paint a better picture of early Earth and the bombardment that modified our planet during the dawn of life," the study co-author David Kring, a Universities Space Research Association scientist at the Lunar and Planetary Institute in Houston, said in a statement.