Even as a child, Hui Feng, head of the Dingjiagou hydrological monitoring station in the Yellow River Basin in Yulin, Shaanxi province, was no stranger to his chosen field. 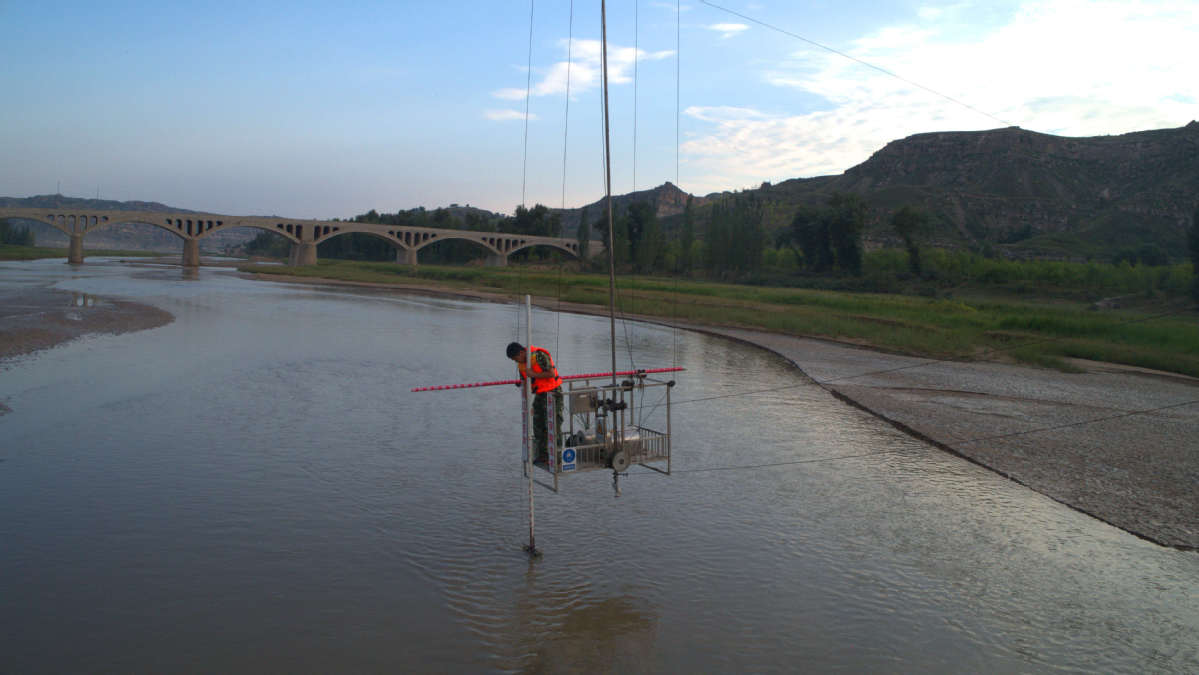 Zheng Wei, head of the Wenjianchuan hydrological station, extracts sand from the sediment-rich Yaoye River, a tributary of the Yellow River, in Shaanxi province. (Photo: Xinhua)

As the son of a veteran hydrological monitor, Hui was a regular visitor to his father's station. He remembers that the monitoring procedure was so dangerous that people regularly fell into the river while operating the equipment.

He recalled that his father was once carried away by a flood. By the time he managed to scramble ashore, he had been carried far downstream. With no public transport in the area at the time, he only managed to get back to his post after two weeks.

As Hui's eyes fixed on a beam that straddles the river, the 38-year-old smiled and said such dangers will soon become history.

That's because the Yellow River Conservancy Commission has increased investment to upgrade monitoring facilities so they can be operated remotely via the internet.

"The beam holds a range of automatic hydrological monitoring equipment," Hui said, noting that the new facilities mean staff members will never have to face direct contact with the water.

The facilities will allow monitoring data to be updated online every six minutes, he added.

The progress of automatic monitoring operations in Dingjiagou reflects a program introduced by the commission in 2016 to modernize hydrological assessment work in the river basin.

The commission said that by January automatic equipment will be used to measure water, precipitation and evaporation levels at all its hydrological stations as it promotes online assessment of water flow and sediment concentrations.

Su Nianliang, head of the Yulin hydrological survey bureau, which oversees the Dingjiagou facility, said 11 of its 13 stations use online monitoring to measure water, evaporation and flow levels.

The bureau's management system displays hydrological information from the stations in real time.

It also remotely controls monitoring equipment in certain facilities, such as the Wubu hydrological station, 160 kilometers away.

Just 100 seconds after bureau officials request information from an exact location in the management system, a range of monitoring data is available.

The system can also provide real-time images of each facility's operations.

More advanced monitoring equipment, such as that used to gauge sediment concentrations, has been undergoing trials and is expected to be installed soon.

When the new equipment comes into operation, most of the monitoring work will be conducted automatically, Su said.

He added that workers in charge of hydrological monitoring stations will only have to conduct regular patrols of the facilities－many of which are located in remote, isolated spots－to check operational status, rather than living on-site permanently.