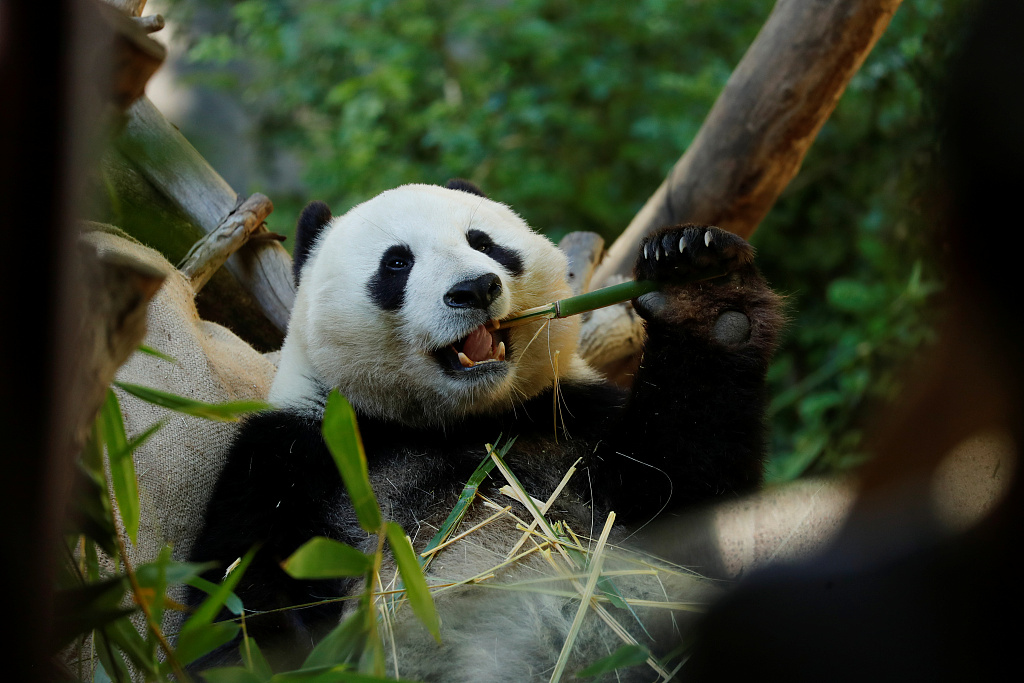 Giant male panda Xiao Liwu eats a meal of bamboo before being repatriated to China with his mother Bai Yun, bringing an end to a 23-year-long panda research program in San Diego, California, US, April 18, 2019. (Picture taken April 18, 2019. Mike Blake)

SYDNEY, May 3 (Xinhua) -- Despite feeding almost exclusively on bamboo, the nutrients that giant pandas consume and absorb most closely resembles that of carnivores, a joint Chinese-Australian study revealed on Friday.

The study by the University of Sydney (UoS) and Chinese Academy of Sciences (CAS) showed that 50 percent of the pandas' energy intake comes from protein, a similar figure to wolves and feral cats.

To achieve their findings, researchers employed an approach called nutritional geometry which considers how nutrients and dietary components mix, rather than focussing only on one nutrient in isolation.

"This study demonstrates the importance of considering both foods and nutrients in understanding the evolutionary ecology of animals, exactly what nutritional geometry is designed to do," UoS's Prof. David Raubenheimer explained.

The findings help to show how giant pandas evolved from their carnivorous ancestors to the bamboo-munching vegans of today.

"It can also explain why pandas have a strange mix of herbivore and carnivore traits," Raubenheimer said.

Over time giant pandas have developed a skull, jawbone and teeth, ideally adapted to chew on fibrous plant materials, as well as a "pseudo-thumb" with which to grip stems while they eat.

However, their digestive tract, digestive enzymes, and gut microbes resemble that of carnivores and not herbivores.

"Based on what they eat, giant pandas absolutely belong to the herbivores, but considering the macronutrient composition of the ingested and absorbed diets, they could also belong to the carnivores," co-author Fuwen Wei from CAS said.