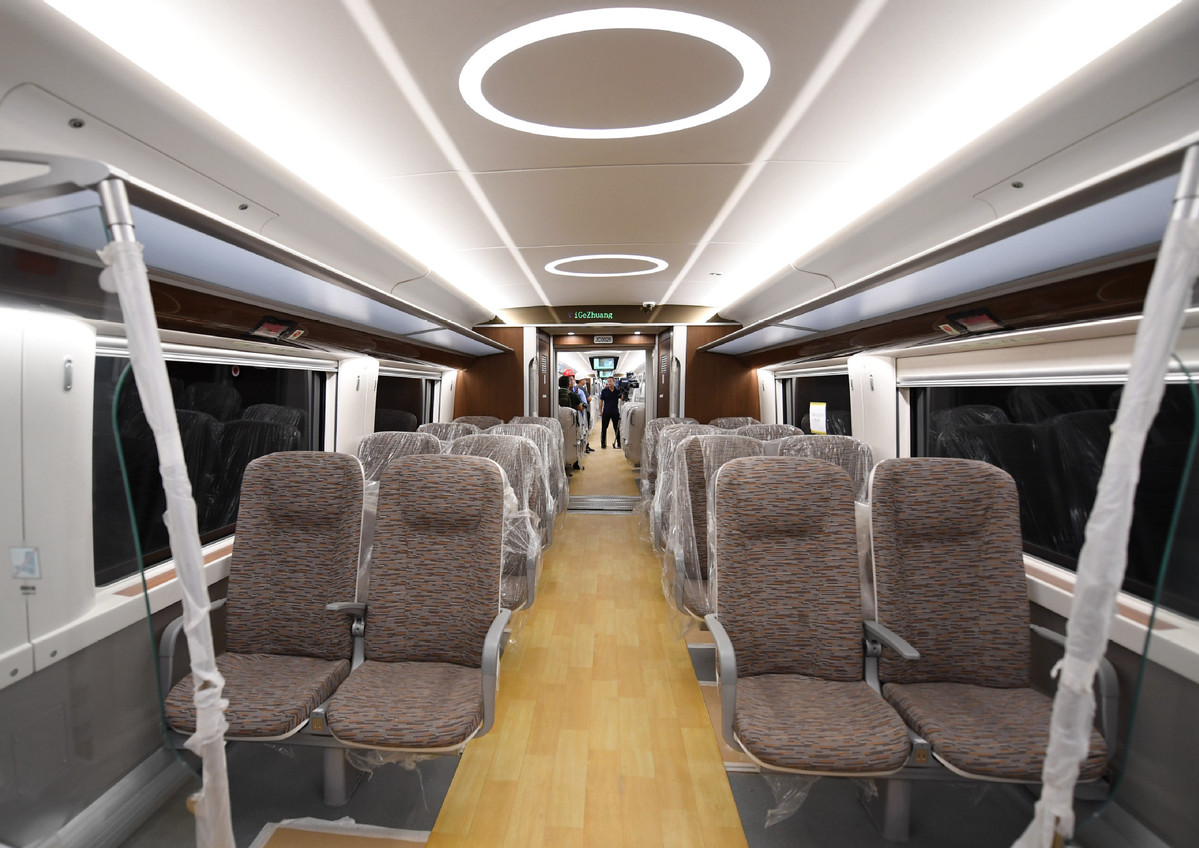 The interior of the new subway line to Daxing International Airport on June 15. (Photo: Xinhua)

Subway trains to Daxing will reach speeds of 160 km/h

It will take nearly the same amount of time to travel by train from central Beijing to the city's new international airport, due to open in September, as it does to travel to the much closer existing airport thanks to a cutting-edge subway link.

The distance from the capital's central business district to the new Beijing Daxing International Airport－around 40 kilometers－prompted concerns after plans for the 80 billion yuan ($11.6 billion) project were approved more than six years ago. That's because Beijing Capital International Airport is just 23 km northeast of the CBD.

But business executives in central Beijing, home to the Chinese headquarters of many foreign companies, have been relieved to learn that travel from their offices to the new airport－on the border of the capital's southern Daxing district and Langfang, Hebei province－will take the same amount of time as trips to the existing airport. This is because trains on the new subway line to the Daxing airport will travel at top speeds of 160 kilometers per hour, much faster than the 90 km/h limit on the Airport Express line to Beijing Capital International Airport.

Li Wenwei, a marketing manager at a Swedish company, works in the World Trade Center in central Beijing and travels frequently. It takes her 44 minutes to get to Beijing Capital International Airport by subway, with one transfer.

"I sometimes go by taxi if I have a lot of luggage, and that can take around an hour due to the traffic," she said. "I use the subway the most, and was worried that the new airport would take much longer to reach."

But when she read about the new subway line's first test run in mid-June, she calculated the time and was happy to discover she will be able to get from her office to Daxing International in just 45 minutes.

"It takes 26 minutes from Guomao subway station to Caoqiao, where the new line starts," Li said. "Then, it will take me only 19 minutes to get to the new airport.

"I never expected it could be so fast and convenient, and there is only one transfer, too."

The subway line to the airport in Daxing will offer travelers many other benefits besides speed. According to the Beijing Major Projects Construction Headquarters Office, trains traveling on the line will have eight carriages, including a business-class one, six regular carriages and one for luggage. Each will be 22.8 meters long and 3.3 meters wide.

Four elevators and two escalators will be installed at each station along the line.

"The size of the seats and aisles are both larger than the ones in the current high-speed trains, which will give passengers more space," said Jiang Chuanzhi, chief designer of the new airport line.

The line will eventually extend northward to the Lize commercial zone, closer to the city center, and passengers will be able to drop their check-in baggage off at the subway station there for transfer to their flights.

"The new line is right at the top of China's subway construction technology and design concepts," said Yang Liya, a researcher at Renmin University of China's Beijing Academy of Development and Strategy.

Achieving that standard has not been easy, and the success of the first test run on the 41-km line, on the morning of June 15, was a milestone in the development of China's subway capabilities.

"Most people saw the train has a designed top speed of 160 km/h, which is the fastest so far in the urban rail system in China," Yang said. "Usually, a city subway line has a top speed of 80 km/h to 120 km/h."

What most people have not noticed is that the carriages are different from those used on regular subway lines.

"The carriages are specially made for this line," said Mao Baohua, a professor at Beijing Jiaotong University who specializes in urban railway design. "They're the same size as the ones used on urban metro lines, but can travel as fast as a high-speed train. That means the cost is much higher than those used on previous lines."

An engineer working on the line, who declined to be named, said the carriages were made on the same platform as the country's CRH6 high-speed trains.

"The significance is that the adoption of the new carriage on the airport line has enlarged the application scenarios for China's high-speed trains," he said.

It's hard to tell from its appearance whether it's a high-speed train or subway train, he said, adding that it will lead to other urban subway lines using high-speed trains after necessary adjustments to infrastructure, and make such services more affordable.

Yang Guangwu, chief engineer of the Beijing Major Projects Construction Headquarters Office, said the new airport line's self-driving system will be the best in the world because it will also extend to checking, operational matters and cleaning, greatly reducing labor costs and increasing efficiency.

Even though Chinese law does not permit human-free driving and operation of subway trains and lines, the technology is already mature.

"The biggest benefit of the system is to raise the accuracy of stopping times, allowing more trains to run on the line during a certain period of time," Yang Guangwu said.

During test runs, trains on the new line have been departing every six and a half minutes.

According to the construction headquarters office, Beijing will apply the automated system on its new subway lines, including lines 3, 12, 17 and 19, which are under construction or on the drawing board.

Many other facilities on the trains illustrate the care taken in their design, and the progress made in China's subway construction capabilities, Yang Guangwu said.

For instance, there are wheelchair spaces and USB charging ports next to the passenger seats, along with variable-frequency air conditioners and LED lighting systems to save energy.

In the business-class carriage, all seats are equipped with tray tables and reading lights.

The three stations along the line will all have rooms where babies can be tended to, and information desks with machines capable of translating in 34 languages.

The airport in Daxing has been designed to become a North China air travel hub.

It is 46 km from Tian'anmen Square, 26 km from downtown Langfang and 55 km from the Xiongan New Area, an area of "national significance" about 100 km south of Beijing covering Xiongxian, Rongcheng and Anxin counties in Hebei.

Foreign airlines, along with those from Hong Kong, Macao and Taiwan, can choose which airport they operate from, with the option of having a presence at both.

An important project in the integrated development of Beijing, Tianjin and Hebei, the new airport will serve passengers from across the region.

According to the integrated development plan, the new airport subway line will be extended to Xiongan. Construction of another intercity railway line connecting Beijing and Xiongan began in July last year and work on an expressway between the two cities is expected to start by the end of this year.

The Beijing Municipal Development and Reform Commission said part of the Beijing-Xiongan intercity rail line, running from Beijing West Railway Station to Daxing airport, will be put into operation by the end of September. It will allow passengers to travel from the railway station to the new airport in just 20 minutes.

The two inner lanes of the 97-km expressway between the two cities, which will have four lanes traveling in each direction, will be designed for self-driving cars－the longest such arrangement on a Chinese expressway.

"The self-driving lanes demonstrate that our self-driving technologies have reached a certain level for both cars and roads," Yang Liya said.

She said the technologies might not be widely used on public roads in the near future, but they could be applied in the fields of logistics and urban sanitation.

"The whole transportation network will help the new airport better serve the neighboring regions," she said. "The new airport subway line will help encourage top talent living in northern Beijing to move to the south of the city, narrowing the economic gap between the two areas."

At the same time, convenient transportation to Xiongan will put people's minds at ease when they are asked to work in or move to the new area.

According to the national plan, a group of State-owned enterprises will move their headquarters to Xiongan to support its development. Some have already made the move.

One reason the high-speed subway line to the new airport is so important is the chronic traffic congestion in Beijing caused by the capital's growing population and limited space.

The municipal government's main infrastructure solution to the problem has been to build more subway lines.

The city will open two more subway lines this year in addition to the high-speed line to Daxing. The other new lines－the eastern extension of line 7 and the southern extension of the Batong line－will connect downtown Beijing to the Universal Studios Theme Park under construction in Tongzhou district.

Meanwhile, line 3 and line 19 are under construction and the government plans to start work on the western part of line 11 this year.

However, experts are not very optimistic that subways are the answer to Beijing's traffic congestion problem.

Yang Liya said that even though the city's subway network has grown in recent years, the amount of land available for roads is limited and accounts for a small proportion of overall land use.

"The number and length of the roads still don't meet demand," she said.

Mao, from Beijing Jiaotong University, said the whole public transportation system needs to be improved to encourage car drivers to use buses or subway lines.

The reason the growing subway network has had little effect on traffic congestion is that it has mainly encouraged people to switch from buses to trains.

"Fewer people have been using local buses in Beijing in the past three years because the mature and convenient subway system has attracted passengers from buses to subways," he said. "Thus, the subways in Beijing are always full of people while the roads are still full of cars."

Only when private car drivers chose to use the subway or buses would congestion be eased, Mao said, adding this meant the bus system needed to improve its punctuality and make transfers more convenient－and that would require a lot of effort.