TECH Permanent settlement on Mars could be built in 20 years: advocate

Permanent settlement on Mars could be built in 20 years: advocate

Humans could build a permanent settlement on Mars where a new branch of human civilization and social order could be created, said a Mars exploration advocate on Thursday. Image of the future life on Mars. (Photos: Courtesy of humanMars.net)

"We could easily have humans on Mars in 10 years or faster if it is an international project," Robert Zubrin, the Mars Society president, told the Global Times in an exclusive interview on Thursday in Beijing.

By then, human beings could go back and forth between Mars and Earth anytime by taking reusable rockets and the technology would be cheaper and cheaper as the spaceflight frequency to Mars increases, he said.

For the first time, SpaceX has made the partially recycled Falcon 9 rocket successfully launch and land in 2017. The success is a step toward vastly less expensive spaceflight, which some hope can revolutionize travel in the solar system and take humans to Mars, the Guardian reported in 2017.

But before the permanent settlement on Mars is built, Zubrin believes the first crew to Mars might only cover essential home builders, including six or 10 crew members, such as geologists, microbiologists and engineers. 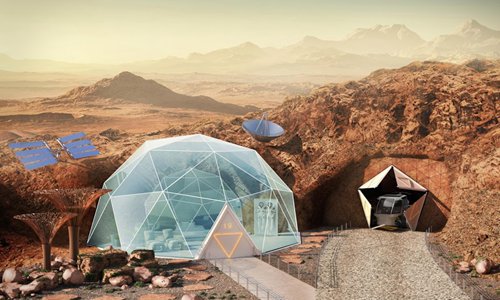 Image of the future life on Mars.

The team of crew members to Mars will grow bigger and bigger, covering more people from different walks of life as the land on Mars being built increases. People eventually can produce stable food, oxygen, energy, or even steel and minerals on the planet, which will take about another 10 years, Zubrin noted.

"From a technical point of view, we are much closer today to sending humans to Mars than we were able to send men to the moon in 1961," said the advocate.

China's lunar rover touched down on the far side of the moon this year and will also launch a rover on the Red Planet in 2020, which is expected to encircle, land on and explore the planet, Xinhua News Agency reported.

Mars exploration has been the efforts of so many countries, including the US, Europe and Russia, who have sent their rovers to Mars. But Zubrin believes future Mars life could be beyond the borders of nations and could be a community with a shared future for mankind. Image of the future life on Mars.

"Do you want children on Mars to only read Shakespeare or do you like them to also read about the Three Kingdoms (220-280 AD)?" Zubrin asked.

A new branch of human civilization might be developed where people believe in the power of invention, the Mars exploration advocate said.

Mars One Ventures, a company that offers one-way tickets to Mars and attracted hundreds of people to apply, declared bankruptcy on January 15, 2019, Forbes reported.

On Mars One, Zubrin said it lacks reliable technical support and its business plan was ridiculous. Their primary target was to create a television show, but this plan could have worked by getting sponsors from an international Mars settlement support organization.

The plan to send humans to Mars should not be about abandoning them on Mars but reinforcing them, he said.

Jiao Weixin, a space science professor at Peking University, however, told the Global Times the vision might be too positive. No country can spare efforts on space technology as much as the Cold War era.

Cover image of the future life on Mars.