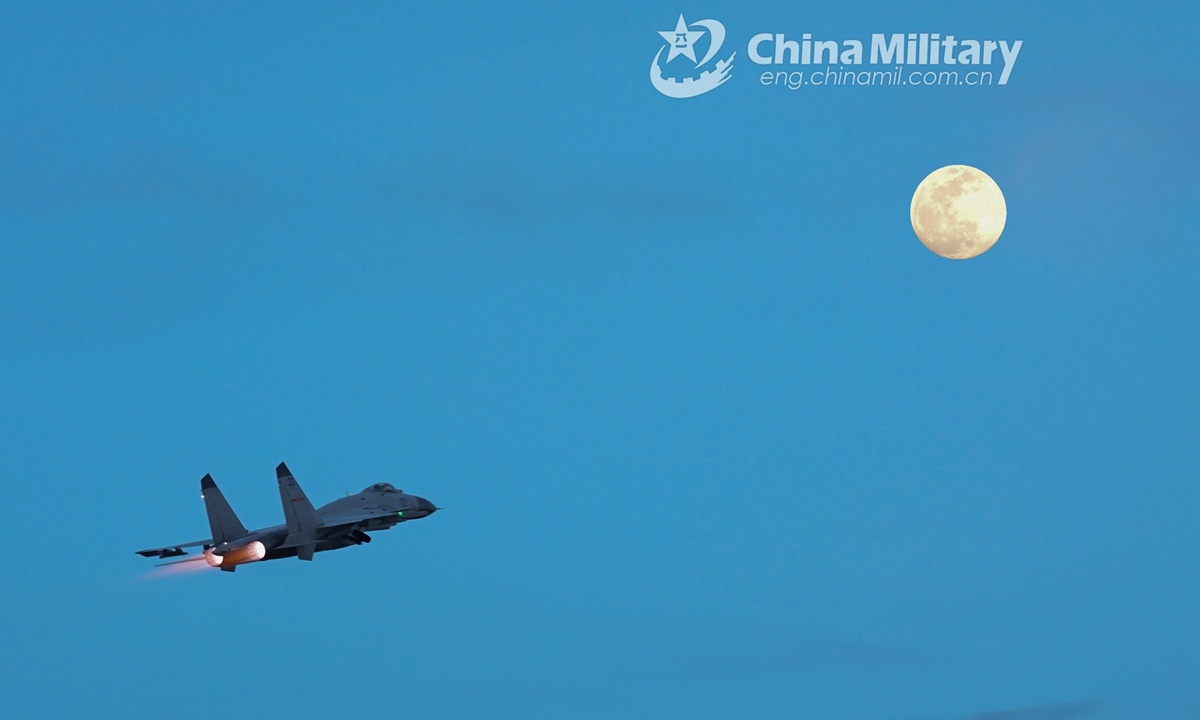 The double-exposed shot shows a fighter jet silhouetted against a full moon at night during a 24-hour flight training exercise organized by an aviation brigade with the navy under the PLA Southern Theater Command. (Photo: China Military)

The Chinese People's Liberation Army (PLA) Air Force is increasing the use of simulators in pilot training, an approach that can significantly reduce cost, increase pilot's training time and practice special scenarios that are hard to replicate with real aircrafts, a recent report said.

An aviation brigade affiliated with the Air Force of the PLA Central Theater Command started to use simulators to train pilots in 2019. By 2020 it had established a training simulation center and proved that it is feasible to reduce training with real aircrafts thanks to training simulations this year, No. 34 Military Room, a WeChat public account affiliated with the PLA Daily, reported on Sunday.

According to the report, Yang Peng, training staff officer of the brigade, noted that compared with the cost of aviation fuel, maintenance of the aircraft and consumption of spare parts, the cost of training simulators is much lower.

Due to the high costs, pilots get fewer chances to practice with real aircrafts. However, simulators will provide more opportunities for them to master flying techniques, the report said, noting that simulators can also replicate many scenarios that cannot be easily tried with real aircrafts, including emergencies.

Starting this year, pilots will be using a type of simulator integrated with artificial intelligence that assists training, learns from each engagement and can become a top ace, even superior to human pilots, the report said

China used to lack the technologies to develop advanced, realistic training simulators to conduct meaningful training but now it has a complete system to develop and maintain this kind of simulators that have become key in the PLA's routine training, Fu Qianshao, a Chinese military aviation expert, told the Global Times.

Simulators help pilots improve their flight skills and contribute to flight safety, and train the pilots' situational awareness and help develop new tactics, Fu said, noting that the simulators could become interconnected with pilots using different simulators and fighting each other in simulated combat scenarios.

The PLA Air Force is not the only PLA service that uses training simulators.

For instance, a logistics support unit affiliated with the PLA Northern Theater Command Navy used virtual reality (VR) simulators to practice the disassembly of equipment, location of malfunctions and fixing of pipelines in a wartime fuel support drill, the PLA Daily reported in March.

A brigade attached to the 83rd Group Army of the PLA has set up more than 10 VR training simulation rooms for instruction in multiple areas, including individual combat skills and coordinated action and command, China Central Television reported earlier this year.

The Rocket Force is also using similar simulation technologies to practice the launch of missiles, like during a launch exercise conducted in mid-March reported by the PLA Daily in March.

The deployment of training simulations is a reflection of the PLA's development of a new military training system and the strengthening of the military by science and technology, analysts said.