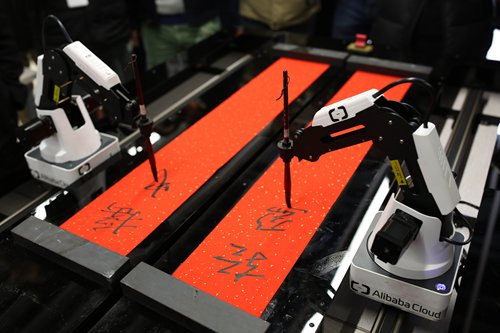 Technological applications have become pervasive in China, from security robots patrolling residential quarters to artificial intelligence-aided gate machines used at train stations. Now, Chinese students have begun using robots to do their homework.The handwriting robots shot to fame in China after a schoolgirl from Harbin, Northeast China's Heilongjiang Province, made her 800-yuan robot do her winter holiday homework, the Qianjiang Evening News reported in February.Robot sellers have called on consumers to be more rational after receiving a slew of return applications when they discovered the devices were too difficult to use. "Our handwriting robots are not meant for students to do their homework. It requires proficient skills to operate it," a seller of the handwriting robot surnamed Li told the Global Times on Wednesday, adding more than a hundred customers have recently applied to return their machines. Based in China's tech hub Shenzhen, South China's Guangdong Province, Li introduced the handwriting robot from overseas at the end of 2015 and began to research, manufacture and sell it on Taobao, China's largest e-commerce platform. Orders of Li's products remained steady until a growing number of buyers ordered the handwriting robot online recently. Although Li's robot is sold at 1,188 yuan ($177.7), which is relatively expensive compared to other similar models, it became a top seller on Taobao with 1,052 sales as of the press time. The surge in sales was more of a curse than a blessing for Li since most of the new orders came from students who are not capable of operating the robot. As a result, they asked for refunds, bringing huge losses to Li's company, he said.

Writer helperThe robot the girl bought with cash gifts during Chinese New Year completed her phrase copying homework in just two days, drawing her mother's suspicions. Moreover, the handwriting was incredibly clear and neat. But while cleaning her daughter's room, she discovered the robot, and got so angry when she found out her daughter had cheated that she immediately destroyed it. She was stunned that this small metal device could "imitate all kinds of handwriting" as its instruction booklet claimed. "I was wondering how you could finish your homework so fast. It turned out you had such a 'writer helper.' A robot can help with homework, but can it help you with exams?" the girl's mother, surnamed Zhang, was quoted as saying by media. "If you don't look closely, you could very easily believe a human did it," Zhang told the Qianjiang Evening News.Sudden popularityWhen searching for "handwriting robots" on Taobao, this Global Times reporter found more than 2,000 similar products, costing from 200 yuan to more than 8,750 yuan. Most of the reviews under Li's writing robots are positive. One buyer commented: "I am very satisfied with the robot since it reduces the boredom of copying."Li told the Global Times there was no cutting-edge technology involved in the manufacture of his robot as he had learned it from California-based AxiDraw robot, which produces writing instruments, including permanent markers and fountain pens. Li, who has developed a software called "Bear Calligrapher," said the robots were supposed to help people with drawing and copying tasks in Chinese. Uploading the text to the software, the cross-shaped metal robot can write words automatically. In fact, such robots are used by stores to send "Thank you" notes to customers, according to Li. "Some stores on Taobao, or restaurants always send such 'handwritten' Thank You notes to customers in order to show their gratitude. They were actually written by robots," he added. Need to copyOne of a robot's advantages is its ability to do repetitive work that human beings easily grow tired of. Many Chinese internet users asked that if a robot can do this copying work, then why shouldn't the girl use it?  The story also led to a heated discussion that went viral on China's Twitter-like Weibo about whether teachers should give copying homework to students. One Weibo user wrote, "My mother forced me to copy concepts when I was young. My teacher was even worse, and always asked me to copy the concepts five to 10 times. One of the worst experiences I had was having to copy all the concepts in half of the book five times each overnight."Copying text is a common education method used by Chinese students to learn and memorize characters. While it is necessary for students to grasp new phrases or words by copying them, the number and content should be controlled properly by teachers, Chu Zhaohui, a research fellow at the National Institute of Education Sciences, told the Global Times on Wednesday.He added the schoolgirl in the news had been forced to buy this device from the pressure of having excessive homework. "If she had a moderate amount of homework, she wouldn't have bought it. Even though the government calls for less burden and homework for students, Chinese students still have a huge amount of homework to do," Chu said. He advised teachers to give homework to students based on their own performance, which means they wouldn't necessarily have to spend holidays doing repetitive handwriting homework.