TECH Primary school to use AI to monitor students

Primary school to use AI to monitor students 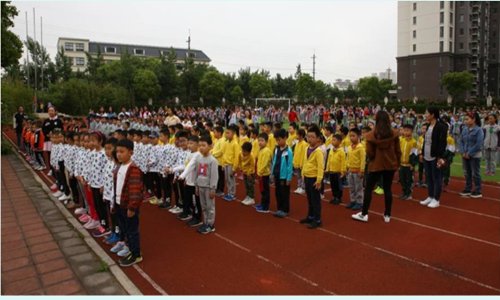 Students who graduated from kindergarten welcome their up-coming study from September at the Minhang Qiangwei Primary School affiliated to Shanghai University of Traditional Medicine in May. (Photo: Global Times)

A primary school in Shanghai is planning to build an artificial intelligence (AI) technology system to monitor and analyze student behavior including extra attention for details such as smiling or yawning.

Chinese experts, however, warned the application could violate student privacy and even contribute to personality disorders.

Such a system would hopefully address previous technical obstacles as well as manpower and resources issues that prevented long-term mass data analysis and evaluation of classes.

Based on the new technologies, the school can now recognize, collect and assess student behavior, such as their sitting posture, yawning, greeting and if they raise their hand to speak in class.

The plan is intended to aid student learning and interests and promote teaching efficiency.

For example, teachers can rate a class by observing the recorded class video and students' emotional data.

Teachers can also improve their teaching methods by analyzing the data, reports suggested.

The school is also building an intelligent security and management system.

Whether a student on campus smiles, greets teachers, volunteers to pick up garbage, runs fast or fights can be captured and recognized by the system.

The application at the school triggered controversy on Chinese social media.

Some others believed the technology violated students' privacy and freedom.

The use of face recognition technology in classroom teaching is not new, Xiong Bingqi, deputy director of the Shanghai-based 21st Century Education Research Institute, told the Global Times on Sunday.

When the system was first used, it could only be used for behavioral analysis, Xiong explained.

Now if it could evaluate student attitude to learning and teacher classroom performance, it might expose more problems and disadvantages, he said.

Such a system would not only invade privacy, but also distort the teacher-student relationship and normal classroom teaching, Xiong believed.

"Schools should instead pay more attention to students' mental development, respect them and understand their confusion in class," he noted.