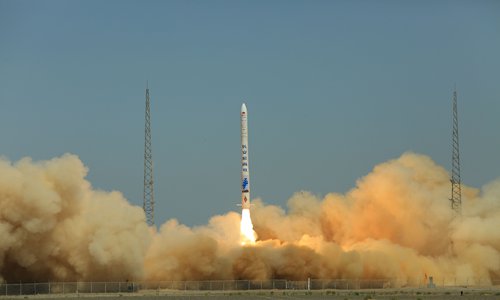 It is the largest and most powerful rocket built by a private Chinese space company, the Beijing-based start-up said.

Fueled by a solid propellant, the iSpace rocket made its breakthrough "from zero to one" for China's private commercial space sector by successfully orbiting the Earth while carrying several satellites, and utilizing space advertising and video transmission.

"This is the first and only private firm in the world, aside from those in the US, to send satellites in orbit," said Yao Bowen, vice president of iSpace.

For China's private rocket sector, to successfully realize an orbital launch is a real test in the commercial space sector race.

The private commercial space sector has been under huge pressure as it drew more attention than other scientific and technology sectors, such as chipsets and artificial intelligence.

Prior to the iSpace launch, two domestic private rocket firms LandSpace and OneSpace failed in their launches.

On March 27, OneSpace failed to send a satellite in orbit due to a malfunction of its OS-M rocket's rate gyroscope.

In October 2018, LandSpace launched its first orbital rocket carrying a small satellite, but the cargo did not reach its target orbit.

Xing Qiang, founder of Micro Rocket Union, an alliance of scientists, told the Global Times Thursday that the significance of iSpace's launch can be likened to what the "two bombs, one satellite" in the 1960s-70s meant to China's initial space development.

"Comparatively speaking, iSpace has the most competent talent pool in technology research among domestic rocket start-ups," Huang Zhicheng, an expert on the space industry, told the Global Times.

Huang noted that the launch on Thursday will greatly boost the domestic commercial space sector's confidence, paving a relatively smooth path for its further development.

"The success will help the nation pursue a strong space drive,"said Huang.

"We're planning to launch five to eight rockets in 2020 mainly focused on orbital launches,"Yao told the Global Times on the sidelines of the launch.

"If there is a market, we'll also do the sub-orbital launch,"he added.

Sub-orbital rockets fly at an altitude of more than 100 kilometers before falling back to Earth.

The start-up's debut launch was in April 2018 in South China's Hainan Province, which showcased the firm's first rocket, SQX-1S.

iSpace will push to become a unicorn in the industry, while showing interest in the nation's science and technology innovation board, Yao said.

Prior to the launch, the firm's market value was around 4.5 billion yuan ($655 million).

Shunwei Capital, a firm invested by Xiaomi Chairman and CEO Lei Jun, also participated in the fundraising of iSpace.

An investor close to iSpace, who requested anonymity, said that as a commercial space start-up, iSpace's priority is to survive.

The development of China's private space sector, including rockets, satellites and space-to-ground internet connections, is still in its initial phase, experts said.

China's aerospace exploration was dominated by state-owned enterprises and institutes until 2014, when private companies were allowed to develop and launch rockets. The latter has obvious advantages in lowering costs and enhancing efficiency.

According to a report released in May by FutureAerospace, a Chinese space consultancy, by the end of 2018, of the 141 registered Chinese companies in the commercial space sector, 123 are privately owned.