TECH Private launch firm: 'We will never flinch or quit'

Private launch firm: 'We will never flinch or quit' 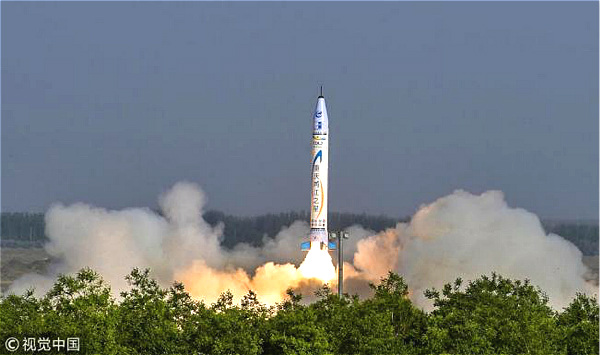 OneSpace becomes the first private company in China to launch a commercial rocket on May 17th, 2018. (File photo: VCG)

China's private rocket launch sector has been striving to expand its presence in the nation's burgeoning commercial space market despite recent setbacks.

Shu Chang, CEO of OneSpace Technology, a space-focused startup based in Beijing, said his company is determined to continue with its research and development of carrier rockets and will also continue fulfilling launch schedules this year.

OneSpace encountered a major setback on Wednesday as the company's first attempt to launch a carrier rocket for an orbital mission failed because of technical problems.

"We will endeavor to launch another OS-M carrier rocket, as well as two to three OS-X suborbital rockets before the end of this year," Shu said late Wednesday at the Jiuquan Satellite Launch Center in the Gobi Desert, where the first OS-M rocket mission was undertaken.

"I accept today's failure," he said. "Other solid-propellant carrier rockets before ours also have had setbacks in their development, but all of them passed through hard times and eventually succeeded. Explorations in science and technology have successes and failures. We will never flinch or quit."

The OS-M Chongqing Liangjiang Star, the first in the OS-M series, blasted off on Wednesday afternoon at the Jiuquan center. About two minutes after liftoff, the rocket fell back to Earth. No one was injured.

The rocket was tasked with placing the ZG6U-1B, a mini satellite designed to give technological demonstrations of its abilities to observe Earth, into a sun-synchronous orbit about 500 kilometers up.

According to OneSpace, the OS-M is a series of solid-propellant rockets with four stages. The one fired on Wednesday was the first type in the series. It was 19 meters long, had a diameter of 1.2 m and weighed 21 metric tons when loaded with fuel and payload. The booster was able to place a 100-kilogram satellite into a sun-synchronous orbit at an altitude of 500 km.

It was the second setback in several months in private Chinese enterprises' efforts to launch carrier rockets and perform missions in orbit.

In October, LandSpace, another private space company based in Beijing, launched a carrier rocket, the first of its ZQ 1 series, at the Jiuquan center, aiming to send a small satellite into space and complete an orbital mission. However, the rocket failed to reach orbit due to mechanical malfunctions.

Before the two unsuccessful attempts, all rockets lifted by private Chinese companies were suborbital models incapable of ferrying a satellite into orbit.

Zhang Changwu, CEO of Land-Space, previously said that his company will stick to its carrier rocket program and it will try to make another launch this year.