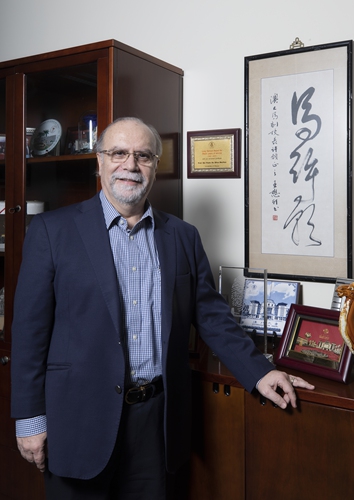 "Macao is known for its casino chips all over the world, but now it is also known by its electronic chips," Professor Rui Paulo Da Silva Martins said proudly.

Professor Martins, a 62-year-old Portuguese scientist, is leading China's electronic chip research as Vice-Rector of the University of Macau (UM). He appreciates the support from the Macao Special Administrative Region (SAR) and the central government.

From desert to state key lab

Professor Martins came from the University of Lisbon, Portugal to UM in 1992, and has been working in UM for 27 years. There were no research results, no funding and no investment toward the research of electronic chip in Macao at that time. Martins called it a desert.

However, when Macao returned to China in 1999, he chose to continue working in UM. He served as Vice-Rector and was teaching his first two PhD students at that time. His sense of responsibility as a teacher and the bright future of Macao made him stay.

"The development of my research and UM went well. The investment from Macao SAR government was strong. I was confident with the development of Macao after the return. Those were mainly my reasons to stay in Macao in 1999," he explained.

In 2003, he created the Analog and Mixed-Signal VLSI (AMSV) Research Laboratory of UM. In November 2010, UM successfully passed the rigorous evaluation of the Ministry of Science and Technology of the People's Republic of China and obtained the approval for establishing the State Key Laboratory of AMSV. This is the first key state laboratory in microelectronics in South China's Guangdong Province and Macao.

The lab is under Chinese leadership, and benchmarks in the world's top conference in electronics, the International Solid-State Circuits Conference in San Francisco, ranking in the global top 10. It has around 100 members, of which 20 are academics; 70 percent of those academics are from Macao.

As the founding director of the lab, Professor Martins expects that the electronic chips of Macao will be as internationally famous as its casino chips.

"I make the similar comparison because our design and development of electronic chips has already been at a leading status in China and reached the world top level. With the collaboration with Chinese companies, we will help develop some Chinese chips in the future that can compete with the rest of the world," Professor Martins said.

They are collaborating with top Chinese electronics companies, making efforts to enhance their contributions and diversify Macao's industrial development.

"We are capable of passing our important expertise to the industry. However, the demand of Chinese electronic industry is developing so fast, the difficulty for us now is accelerating our research to meet the industrial demand," he said.

"Compared with the research in Portugal, now we are more advanced," Professor Martins asserted. He appreciates the significant support from the central and Macao governments.

Since 2011, the Macao Science and Technology Development Fund granted $1.8 million per year to the lab. It also received 1 million yuan in 2019 from the central government just like all other state key labs in Hong Kong and Macao, he said.

The government of Macao SAR obtained the land use right of the new campus on Hengqin Island, Zhuhai, South China's Guangdong Province, with a 40-year lease set to expire on December 19, 2049. The campus is about one square kilometer, a 20-fold increase in space from the old campus on Taipa Island.

"It shows the strong support from the central government. We have more space to enroll more students and build bigger labs for more scientific equipments," he said, adding that "the amount of UM students rose from 3,000 in 1999 to more than 10,000 in 2019."

The diligence of his colleagues and students from Macao and the Chinese mainland is also significant to the fast progress of their research, he said. He believes that with well-trained scholars, world-level advanced scientific equipments, sufficient funding and strong support from government, the lab can contribute and cultivate more advanced talents for China's electronic chips industry.

Professor Martins professed that he is quite impressed by the Basic Law of Macao SAR and how it has served the city. "I think that the Basic Law is quite good and well adapted to the Macao circumstances. My life was maintained with no change between pre-1999 Macao and Macao SAR post-20 Dec 1999," he said.

He came to Macao with his wife and three primary school-aged children in 1992. As Portuguese living in Macao, the city's people treated them just as friendly after the return as they had before.

His children went to Portugal for their bachelor's degrees, as universities in Macao did not offer the programs they wanted. They continued their education and earned master's degrees in the United Kingdom and Hong Kong SAR.

However, two of his children chose to work in Macao after graduation. They have been married and built their own families in Macao.

"They are completely free to do what they want, they chose by themselves to come back to Macao," Professor Martins said. His children say they enjoy the life in Macao. They are more confident in its stable development.

"Macao can be said as their hometown. They grew up here," he said.

Professor Martins has a Chinese name called Ma Hoi-un, which means "making a wish." It was attributed by a Chinese administrative colleague two weeks after he arrived in Macao.

"The first character Ma is related with my surname Martins. The best wishes must have been related with some proposals I was making to UM management when I arrived here in 1992. If I make a wish now would be for Macao to maintain its prosperity in the coming decade," he said.