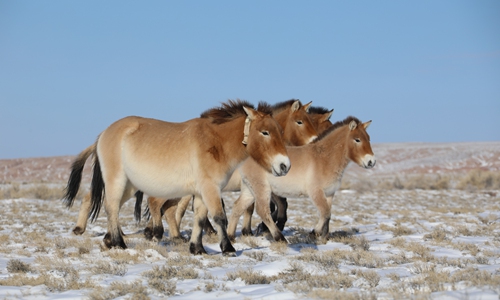 The population was successfully reintroduced to the wild as its initial six horses grew to 19 after a little more than a decade.

The collar helps monitor the wild horse remotely with a video-shooting function and can drop automatically.

Przewalski's horse, one of the most endangered large wild animals in the world, is enlisted as one of China's "Class 1 Protected Species" and categorized as "endangered" by the International Union for Conservation of Nature (IUCN) Red List of Threatened Species Working Group. There are approximately 2,000 in the world. Some 600 live in China with the rest living in the US and some western European countries.

China brought in 24 Przewalski's horses since 1985 from European countries and the US after the horse, originally from China' Xinjiang, went extinct in China in the 1970s due to poaching from some European countries such as Germany, France, and the UK.

After three decades of breeding, a total of 110 Przewalski's horses, from 16 different groups, have been released to the wild since China first returned the horse to the wild in August 2001.