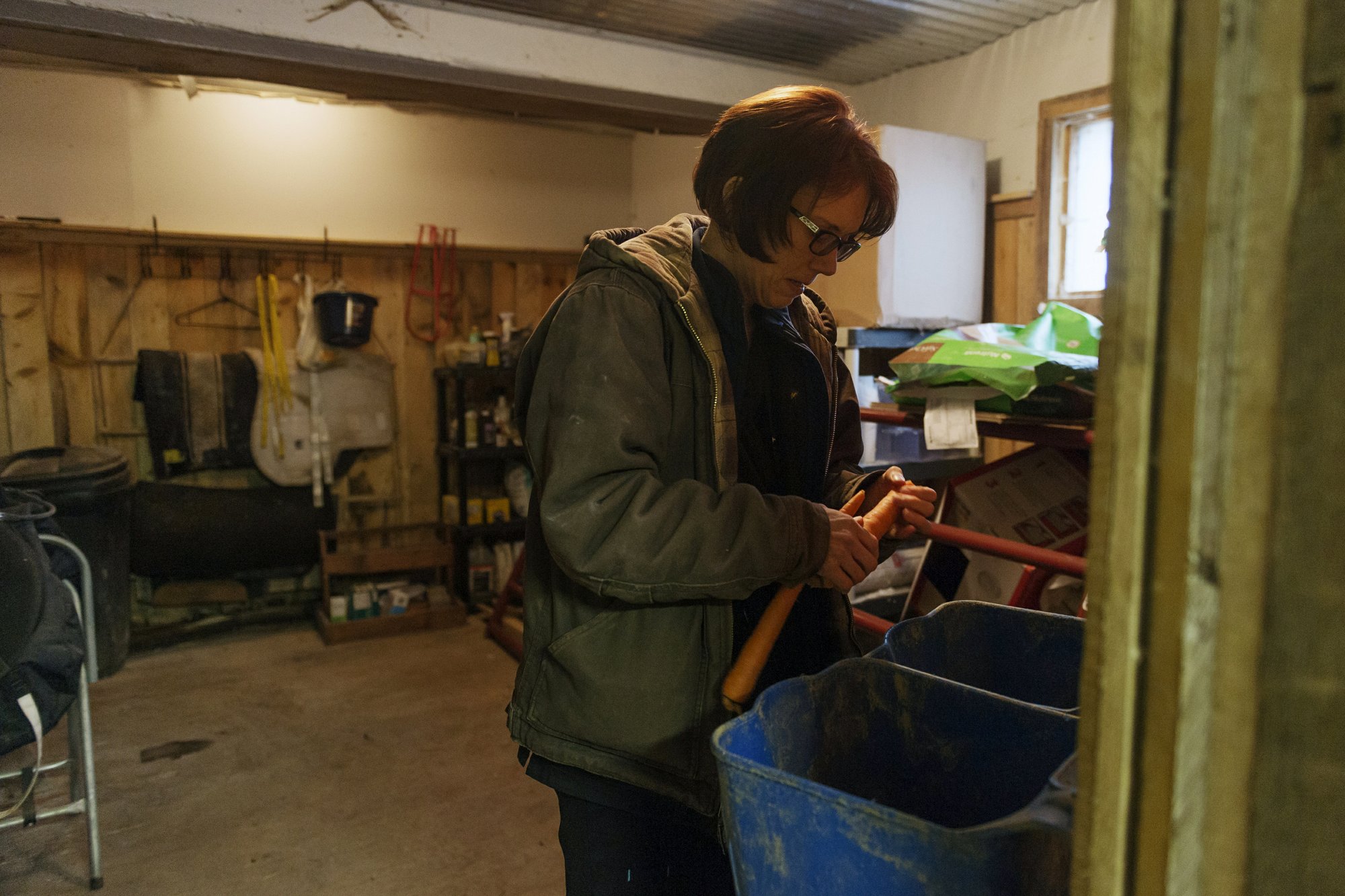 Kelly Povroznik grabs a few carrots from inside her storage space to give to her horses in their pasture outside of Clarksburg, West Virginia on April 5, 2019. (Photo: AP)

There is a way around the notoriously sluggish internet in West Virginia. You just need a car and some time.

Kelly Povroznik can tell you, when she happens to get a good signal. She teaches an online college course so hampered by unreliable connections that she has had to drive a half-hour to her brother’s place just to enter grades into a database.

“It added so much additional work for me, and I just don’t have the time,” said Povroznik, who lives in Weston, West Virginia. “I just kept wanting to beat my head into a wall.”

Across rural America, a bandwidth gap separates communities like Weston from an increasingly digital world where high-speed internet has become a fundamental component of modern life, putting them at a disadvantage when it comes to economic growth and quality of life advancements.

A $4.5 billion federal grant program earmarked to expand wireless internet in rural areas was supposed to address the problem, but it’s on hold while the Federal Communications Commission investigates whether carriers submitted incorrect data for the maps used to allocate grants.

The broadband maps deemed Weston, a city of about 4,000 people, too well connected to qualify for a grant — even though the problems there are obvious to anyone who’s tried to send emails from their phones or gotten lost because Google Maps wouldn’t work.

FCC Commissioner Jessica Rosenworcel concedes that the agency doesn’t know for sure where the needs are most acute, calling it “embarrassing” and “shameful.”

“Our maps simply do not reflect the state of deployment on the ground. That’s a problem,” Rosenworcel said. “We have a digital divide in this country with millions of Americans who lack broadband where they live. If we want to fix this gap and close this divide, we first need an honest accounting of high-speed service in every community across the country.”

Lawmakers across the country are concerned that flawed, carrier-submitted maps on cellphone and home internet connectivity are crippling the effectiveness of various grant programs. In February, West Virginia Democratic Sen. Joe Manchin joined 10 other senators in pushing the FCC for more accurate baselines.

Disagreements over the data have led to wildly different figures on high-speed internet availability nationwide — and a growing sense that the government just doesn’t know.

On one end, the FCC says more than 24 million people lack access to broadband at home. On the other, a recent study by Microsoft — which is pushing its own approach to extending broadband to rural areas — found that 162.8 million Americans don’t use the internet at high speeds, a problem that may point to cost of access, as well as lack of availability.

Part of the discrepancy has to do with how the FCC collects data. The agency considers an entire area covered if a carrier reports that a single building on a census block has fast internet speeds. Experts say this method allows carriers to attract more customers by advertising larger coverage areas. Critics argue that it is a poor way to determine internet speeds and have long called for more granular data.

Complaints about the wireless map have poured in to the FCC. The Rural Wireless Association, a trade group, asked the agency to investigate data submitted by Verizon and T-Mobile, suggesting the companies overstated coverage. The companies have denied doing so.

The February letter from Manchin and the other senators implored FCC Chairman Ajit Pai to use crowdsourced data and public feedback to create more accurate maps. Some of them have since introduced legislation to force the FCC to widen the scope.

Federal lawmakers from New Hampshire sent a separate letter, saying the FCC was forcing cash-strapped local governments there to disprove overstated claims made by carriers in the agency’s formal process for challenging the mapping data.

All told, only about 20 percent of the 106 carriers, government and tribal entities who could have challenged the FCC’s wireless map data actually did so, according to the FCC.

The whole process frustrated Manchin, who told the AP in an email: “As long as we continue to rely on carriers just telling us what they cover, we will never have a complete picture that depicts the real-world experiences of West Virginians.”

The FCC put the grant process for the $4.5 billion program on hold late last year as it launched an investigation into whether one or more major carriers violated rules and submitted incorrect maps. The investigation is ongoing.

Christopher Ali, an assistant professor of media studies at the University of Virginia, said the looming mapping question leaves the government flailing blindly at a problem that prevents it from meeting the needs of rural America.

Povroznik knows they exist in Weston, where she had to come up with work-arounds — including jumping in her car — to cope with spotty connections that disrupted her ability to field questions submitted by students online. She saw some improvement after switching service providers.

“In this technologically advanced world that we live in, it shouldn’t have been as difficult as it was for me to get this situation resolved,” she said.