The "menu" for giant pandas 5,000 years ago might have been more diversified than today, when the black-and-white mammal lived in a wider range of environment besides bamboo forest, according to new research. 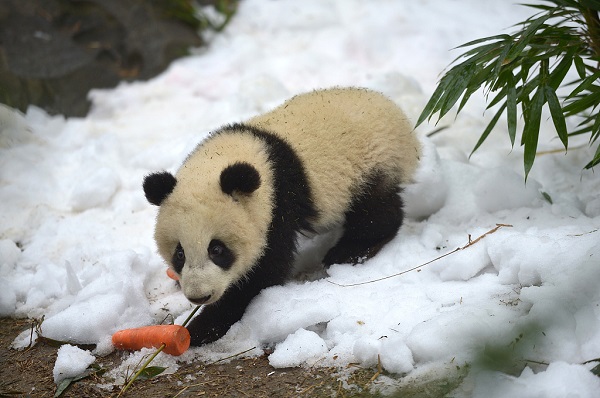 Giant panda changed from omnivorous to vegetarian over its 8 million years of evolutionary history. It had been believed that giant pandas shifted to eating just bamboo about 2 million years ago.

But new research by a team of scientists with the Institute of Zoology of the Chinese Academy of Sciences (CAS) has found that giant pandas hadn't become a specialized bamboo eater until around 5,000 years ago.

"Giant pandas had become herbivores like deer at that time. But it's hard to know what specific plants they ate. We believe there were some herbs in addition to bamboo on their food list," said Wei Fuwen, an academician of CAS and the leader of the research team.

Many large animals living in the same epoch as giant panda, such as stegodon, have become extinct. But the giant panda survived through millions of years, probably by constantly altering its diet to cope with the change in the environment, said Wei.

The research was published online in academic journal Current Biology on Thursday.