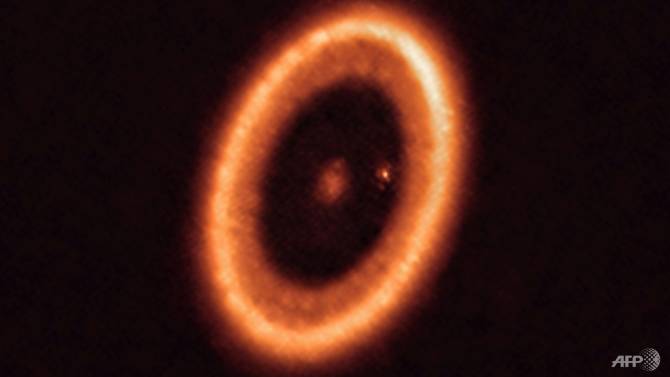 The PDS 70 system captured by the ALMA. (Photo: AFP)

For the first time, scientists have clearly identified a ring of gas and dust circling a planet outside our solar system – a discovery that could help reveal how planets and moons are formed, a study showed Thursday.

The disc surrounds an exoplanet dubbed PDS 70c, one of two gas giants similar in size and mass to Jupiter that orbit the star PDS 70, nearly 400 light years from our solar system.

Those observations combined with high-resolution images from the Atacama Large Millimeter/submillimeter Array (ALMA) telescope, also in Chile, allowed them to conclude that PDS 70c's disk holds material that will allow moons to form around the planet, said the study, published in "The Astrophysical Journal Letters."

Astronomers have known since 2006 that the star PDS 70 is surrounded by a very large ring of material but limitations on the observational equipment only allowed them to guess at the presence of a planet between the star and the ring.

"Our ALMA observations were obtained at such exquisite resolution that we could clearly identify that the disc is associated with the planet, and we are able to constrain its size for the first time," the study's lead author Myriam Benisty said in a press release.

Both planets discovered in the system hold major interest for researchers because they belong to a young star system.

The star PDS 70 is 5.4 million years old – a spring chicken compared to our Sun, which has been around for 4.6 billion years.

Miriam Keppler, a researcher at the Max Planck institute and study co-author, discovered PDS 70b in 2018.

"More than 4,000 exoplanets" – planets outside our solar system – "have been found until now, but all of them were detected in mature systems," she said in the press release.

"PDS 70b and PDS 70c, which form a system reminiscent of the Jupiter-Saturn pair, are the only two exoplanets detected so far that are still in the process of being formed."

The material surrounding PDS 70c is enough to form our moon three times over. Jupiter, which is a much older planet, has four moons and dozens of smaller satellites.