Mak Hin-yu of the Hong Kong Special Administrative Region expects a strong performance next year for his company - a developer of 5G-enabled motion-controlled humanoid robots - as 5G telecom service is set to begin in China. 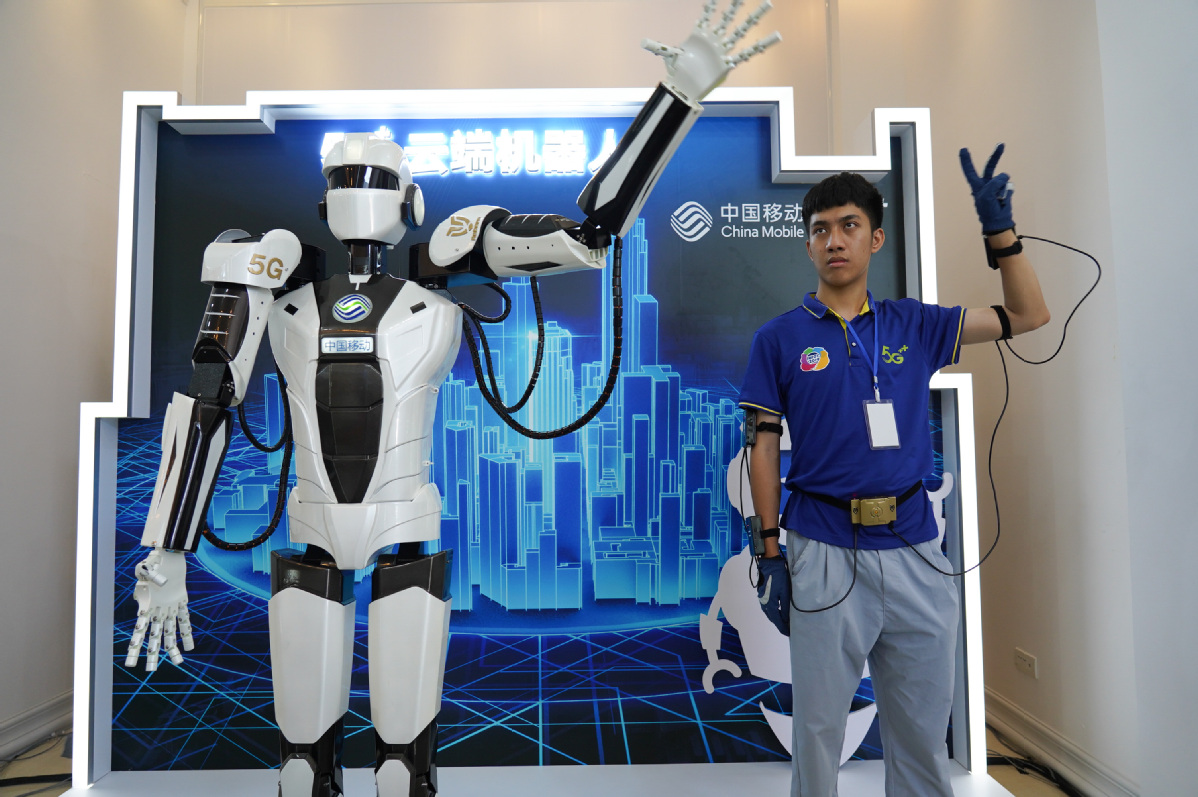 A robot capable of simulating human movements using a 5G network is displayed at the opening of the Jiangxi International Mobile Internet of Things Expo in Yingtan, Jiangxi province, on Thursday. (Photo: Xinhua)

Through a self-developed algorithm, four controlling sensors, and the operator's body and finger movements, the robot can be directly controlled at the whim of the user, he said.

The technology can help in life-threatening missions as well as in rehabilitation and education. A mid-to high-end Roborn robot costs about 400,000 yuan.

Thanks to the large bandwidth and low time delays, 5G technology allows smoother robot actions and better synchronization between the operator and the robot, he said.

"Telecom operators are also promoting 5G applications. I'm optimistic about the market," Mak said, adding that his team has promoted the products in almost all provinces in the country.

The company employs seven people in Hong Kong for project management and software development and about 50 in Jiangmen, Guangdong province, where a research and development center is located and a manufacturing facility is planned. The staff at the center is set to exceed 100 by the end of this year.

It also runs a sales and management office in Guangzhou and electric motor developing operations in Dongguan, two other cities in Guangdong.

The greater integration of the Guangdong-Hong Kong-Macao Greater Bay Area has provided greater convenience for Hong Kong startups and more flexibility to employees, Mak said, citing easier transport via a high-speed railway and the Hong Kong-Zhuhai-Macao Bridge, as well as favorable personal income tax rates on Hong Kong and Macao talent working in Guangdong cities in the area.

Apart from financial support from the Hong Kong government, the company - as an entrepreneurial and innovative entity - has also received support in Guangdong such as preferential rental rates, access to an industrial fund and housing subsidies.

Such support is helpful to the company and it plans to talk with investors as it anticipates rapid business expansion, Mak said.

Roborn will draft a development blueprint closely related to 5G development in China, he said.

The company has also signed up for an entrepreneurship and innovation competition in Guangdong province.

The Community Entrepreneurs Cup competition will take place later this year with contestants from Hong Kong and Macao to attend.

Focused on serving the Guangdong-Hong Kong-Macao Greater Bay Area, the competition is meant to facilitate the commercialization of scientific and technological research results and the industrial chain in the region, it was announced at a news conference last month in preparation for the competition.