Engineers check sections of a Long March 11 carrier rocket at an assembly workshop of the China Academy of Launch Vehicle Technology in Beijing. (Photo: China Daily)

China is set to conduct the country's first space launch from a sea-based platform in its territorial waters before the end of this year, aiming to provide a new option for domestic and international clients, project heads said.

"This mission was initially intended as a technological demonstration of a seaborne launch, but we later decided to make it a commercial operation," Li said in his office at the China Academy of Launch Vehicle Technology in southern Beijing.

Long March 11's sea launch plan will be the latest attempt in the global space industry to use a maritime launch platform for rockets. The world's first launch at sea was made in April 1967 with a Scout B carrier rocket, developed by the United States, from the San Marco platform of Italian-owned Luigi Broglio Space Center, off the coast of Kenya. The most recent sea launch took place in May 2014, when Sea Launch, a multinational joint venture, sent a Zenit-3SL rocket from the company's mobile launch platform Odyssey into orbit carrying a communication satellite.

Compared with conventional land-based launches, a sea mission has a lower risk of causing trouble for densely populated areas along the rocket's trajectory. The method also allows launches to be made near the equator, which increases the rocket's carrying capacity, lowers launch costs and extends the life span of some satellites, Li said.

Designed and built by the China Academy of Launch Vehicle Technology, the Long March 11 is the first and only solid-fuel carrier rocket in the Long March family, the pillar of the country's space programs.

The model has a length of 20.8 meters, a diameter of 2 meters and a liftoff weight of 58 metric tons. It is capable of sending 700 kilograms of payload to a low-Earth orbit, or 400 kg to a Sun-synchronous orbit 700 kilometers above the ground, the academy said.

Its first flight was in September 2015 from the Jiuquan Satellite Launch Center in northwestern China's Gobi Desert, ferrying four satellites to a Sun-synchronous orbit.

The rocket has performed six launches and placed 25 satellites into space. All the missions began at the Jiuquan center and were successful.

When the Long March 11 program started in 2010, the rocket was primarily tasked with emergency replacement of damaged satellites and sending new ones to establish a network within a short period of time, Li said.

Along with the rapid growth of China's commercial space sector, Li's team gradually realized the rocket's commercial potential and began to tap it.

"We succeeded. We have made it a popular choice for users seeking a good, affordable solid-propellant rocket," Li said.

"Compared with other solid-propellant carrier rockets in China, the Long March 11 has better reliability, a higher success rate and shorter preparation time, and it's compatible with 80 percent of small satellites in the global market," he said. "Furthermore, if the planned sea-based mission is successful, we will be able to offer our users a new option that will promise them a more flexible and cost-efficient service when it comes to launching some types of satellites." 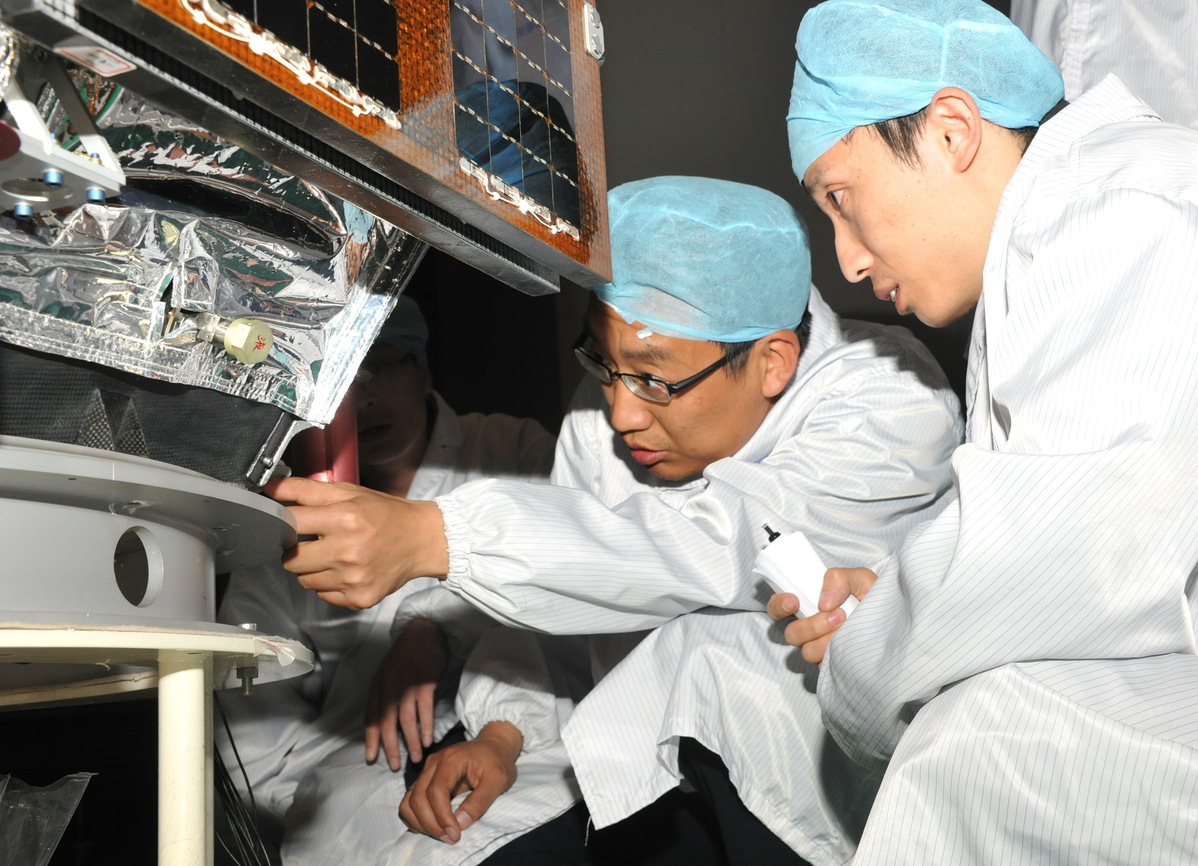 Jin Xin (center), deputy project manager, examines a satellite mounted on a Long March 11 rocket, along with his colleagues at the China Academy of Launch Vehicle Technology in Beijing. [Photo provided to China Daily]

According to Meng Xiang, chief of international cooperation at the China Academy of Launch Vehicle Technology, the demand for launch services by small rockets like the Long March 11 is considerable in both the domestic and international markets as a result of space companies' race to establish networks of small, low-orbit satellites.

Such satellites, Meng said, are capable of covering most parts of the world if they are lifted from regions with low latitudes, namely those near the equator.

"Therefore, the sea launch, with its unique advantages, will have bright prospects in the market," he said.

Zhang Feiting, an engineer in the Long March 11 project, explained the differences between a land-based launch and a sea mission.

"First, control signals are transmitted via wired communication systems in a land-based launch. In a seaborne task, they are through wireless transmission. Second, the rocket's flight safety is monitored, measured and handled by ground control in land-based operations, while in a maritime mission it's determined and commanded by the rocket itself autonomously," Zhang said. "And third, the land-based launchpad doesn't move, but the maritime platform does, so a rocket to be blasted off at sea is equipped with a special aiming device to cope with tidal movements."

Moreover, a rocket used at sea must be adapted to suit a marine environment that has fog, high moisture and complicated electromagnetic conditions, he said.

"To prepare the rocket ready for seaborne missions, we have made some modifications for transportation and launch," he added.

Zhang said he hopes the ability to lift off from the sea will enable Long March 11 to offer services to nations involved in the Belt and Road Initiative.

"Many countries that have participated in the initiative are located near the equator. We can sail our rocket and launch platform to their port and mount their satellites on the rocket and then lift them into space. This will be very convenient for them to launch their own satellites," he said.

Jin Xin, deputy project manager of the Long March 11 project, said he is convinced that in the fiercely competitive market of commercial launches, a high rate of success and a prompt response to users' demands will be the ultimate determinants on whether clients are won or lost.

"So I often reiterate that it is crucial for us to fulfill clients' requirements as soon as possible and to make sure each and every mission a success," he said. "We are dedicated to ensuring the high quality and reliability of our products."

Song Yongsheng, a project coordinator at the launch vehicle academy, said the Long March 11 has proved to be reliable and is a recognized solution to clients' diverse needs. He attributed the model's success in the market to what he called "characteristics in its genes"－innovation, market orientation, pursuit of perfection, flexibility and ease of use.

Jin said engineers used innovative and optimized approaches when they developed equipment and software for the rocket.

"For instance, they adopted integrated, modular designs on the satellite-rocket joints and in flight-control software, extensively streamlining a number of procedures," he said.

Designers have begun to develop an upgraded variant of the Long March 11 called the Long March 11A, Jin said, adding that the new type will be wider and taller than its predecessor and will have greater thrust.

It will be able to send 1.5 tons of payload to a Sun-synchronous orbit at an altitude of 700 km, nearly four times the Long March 11's capacity in that orbit, he said.

The new rocket will replace some old types in the Long March series that rely on poisonous propellants, he added.