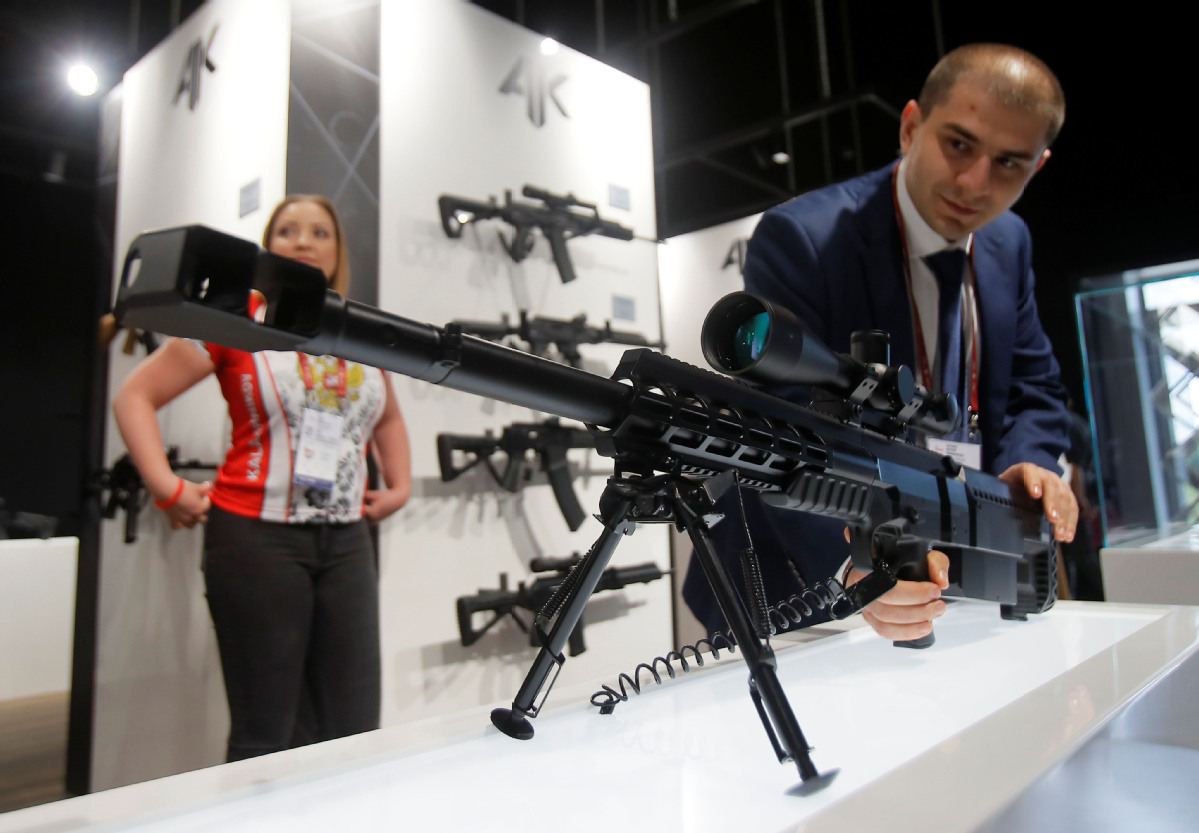 A man inspects a Kalashnikov sniper rifle during the military-technical forum ARMY-2019 in Kubinka, Russia, on Tuesday. (Photo: China Daily)

More than 1,000 items of military equipment including some of the most advanced weapons and concepts are being exhibited at the Army-2019 Military and Technical Forum this week in Kubinka, Russia, a city about 60 kilometers west of Moscow.

More than 1,500 enterprises and organizations are in attendance at the show, which features nearly 27,000 products and technologies. It will last until Sunday.

"This year we've invited delegations from over 100 countries to take part in ARMY-2019. Official meetings will be held with 70 of them on the sidelines of the forum. ... The level of representation of partner countries is quite high this year: Over 30 of them are headed by defense ministers, their deputies and chiefs of the general staff," said Sergey Chemezov, CEO of Rostec, Russia's state-owned company that specializes in the defenses and military high-tech industries.

"Russia confidently continues to occupy second place in the world by the volume of arms exports," Chemezov told China Daily.

In 2018, Russian delivered $13.7 billion of arms exports, and garnered $50 billion of export contracts, according to Rosoboronexport, Russia's defense product export company. Some of these numbers were achieved via active marketing through such platforms as the Army Forum, according to Chemezov.

At the forum, Russia also demonstrated its most advanced Korsar short-range reconnaissance drone for the first time. It has a maximum takeoff weight of 200 kilograms and a flight range of 120 km. The Korsar can develop a speed of 120-150 km/h at an altitude of up to 5,100 meters. Its flight duration is 10 hours.

Russia's Krylov State Scientific Center displays at the Army-2019 a new concept of an aircraft carrier that will outshine the United Kingdom's Queen Elizabeth ship by its operational characteristics, Tass News Agency reported.

"An aircraft carrier with a conventional propulsion unit is the distinctive feature of the version offered to the navy," said Center Scientific Head Valery Polovinkin.

"Such an aircraft carrier will be four-six times cheaper than its nuclear-powered version," Polovinkin said.