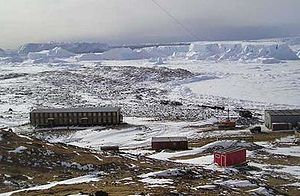 MOSCOW, May 23 (Xinhua) -- Russia plans to recommission its Antarctic Russkaya station in 2021 mothballed since 1990 and upgrade another one, the Vostok, an official said Thursday.

"The decision to reopen the station was made mostly at the initiative of the state space corporation Roscosmos," Alexander Klepikov, deputy director of the Russian Arctic and Antarctic Research Institute, was quoted by TASS news agency as saying.

He said that Roscosmos plans to install equipment for its GLONASS global satellite navigation system and spacecraft tracking devices in the Russkaya station.

The Russian Antarctic Expedition has obtained about 300 million rubles (some 4.6 million U.S. dollars) for the reopening of the station, Klepikov said.

The station started operation in 1980 and was mothballed 10 years later due to budget constraints.

According to Klepikov, Russia is going to upgrade another station, the Vostok, which is the country's single one in the Antarctic inland.

The upgrades will enable the station to house 15 people from the current 13 in winter and up to 35 people in other seasons, Interfax news agency quoted Klepikov as saying.

Russia has three other permanent stations in the Antarctic, namely the Progress, the Mirny and the Bellinsgauzen, as well as three seasonal ones.