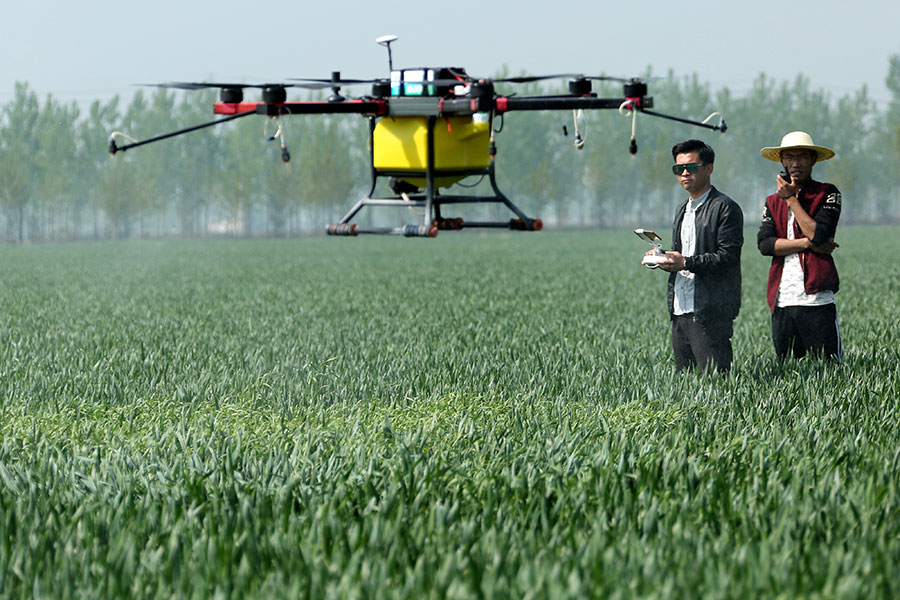 China is on track to achieve its goal of boosting the contribution of scientific and technological progress in agriculture to more than 60 percent by the end of next year.

Last year, innovations in the sector, including improved crop strains and more effective, environmentally friendly farming practices, accounted for 58.3 percent of total growth, up more than 10 percent from 2005 and nearly 5 percent higher than seven years ago, according to the Ministry of Agriculture and Rural Affairs.

Du Zhixiong, a researcher at the Rural Development Institute at the Chinese Academy of Social Sciences, said China's agricultural sector was plagued by inefficient production practices for many years, while annual output was highly susceptible to changes in climate.

For example, from 1959 to 1961 large parts of the country experienced a severe drought.

Since the early 1980s, the central leadership has attached great significance to agricultural innovation. In 2015, investment in scientific and technological research reached 55 billion yuan ($7.8 billion at today's rates), compared with 720 million yuan in 1978, Du said.

According to the ministry, more than 96 percent of fields dedicated to the cultivation of major crops, including rice, corn and wheat, are sown with high-yield, resilient species.

A number of crop-breeding platforms that employ scientifically proven approaches-such as the use of "dwarf-sterile" wheat, the "super rice" system and hybrid corn breeding-have been established to fast-track improvements in edible crops and ensure the food supply is reliable and safe in the long term.

The wide application of modern farming techniques has also helped farmers to raise yields and reduce damage to the environment.

At present, environmentally friendly methods are used to prevent and control pests on 56.7 million hectares under cultivation, accounting for 15 percent of the total area affected by such pests.

Meanwhile, smarter use of pesticides in demonstration areas has reduced the use of chemicals by 20 to 30 percent, the ministry said.

The use of fertilizers has been further contained as a result of a nationwide campaign launched in 2005. It aims to tailor the use of synthesized fertilizers to suit local soil conditions and improve awareness of the scientific management of fertilizers among farmers.

To date, the program has been used on 123 million hectares of land.

In 2017, about 58 million tons of fertilizer were sprayed on farmland, a decline of nearly 1.25 million tons from the previous year.

The application of fertilizer on land used for the cultivation of rice, wheat and corn has also been more productive, with the utilization rate-the amount of nutrients crops can absorb-rising from 35.2 percent in 2015 to 37.8 percent in 2017.

As China continues to strengthen its ability to secure the food supply under all natural conditions, crop losses due to natural disasters have remained at 5.7 percent every year in the past decade, having fallen by a total of 3.6 percentage points from 1999 to 2008.