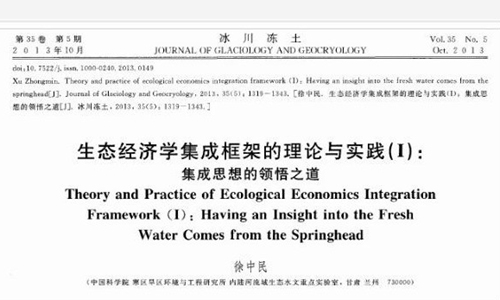 A Chinese scientific journal has retracted a paper about the author's "noble" mentor and the mentor's wife's beauty after being lambasted on social media, which called it ridiculous and a shame on the academic community.

Journal Glaciology and Geocryology made the announcement on Sunday on its WeChat account.

The major parts of the thirty-page paper, titled Theory and Practice of Ecological Economics Integration Framework published in 2013, were about the glorious deeds and loving stories of his mentor Cheng Guodong and Cheng's wife, arguing that the aim of life is a combination of nobility and beauty, except for the introduction section which covers some academic concepts.

Cheng, the editor-in-chief of the journal and an academician of the Chinese Academy of Sciences (CAS), responded by saying he was unaware of the publication of the article but would take responsibility for it and resign for the bad impact it has had on society, Shanghai-based news outlet The Paper reported Sunday.

"How ridiculous it was that a natural science journal published such nonsense. Is that what academia is?" a Weibo user asked after a netizen posted a screenshot of the article on Weibo, which soon went viral and triggered questions over the journal's credibility.

"Such an article with the obvious intention of kissing his mentor's shoes got published in an influential journal, something so many hard-working graduate students dream of - this is a shame for the academic community," said Si Ning, a commentator from The Beijing News.

The article was sponsored by the National Natural Science Foundation of China. "That's how the government's money was wasted while some projects that really need it cannot receive sponsorship," said another internet user.

Some netizens suspect that the journal implements a lower or even no threshold for authors seeking to publish their articles if they have affiliations with the editors.

As a student of Cheng's, the author Xu Zhongmin was found to have published other papers that netizens claimed are not consistent with the research requirements of the journal. Another article by Xu offered suggestions to researchers on how to pursue excellence.

The journal has vowed to review other articles by Xu, who is now a research fellow and PhD instructor with the CAS.