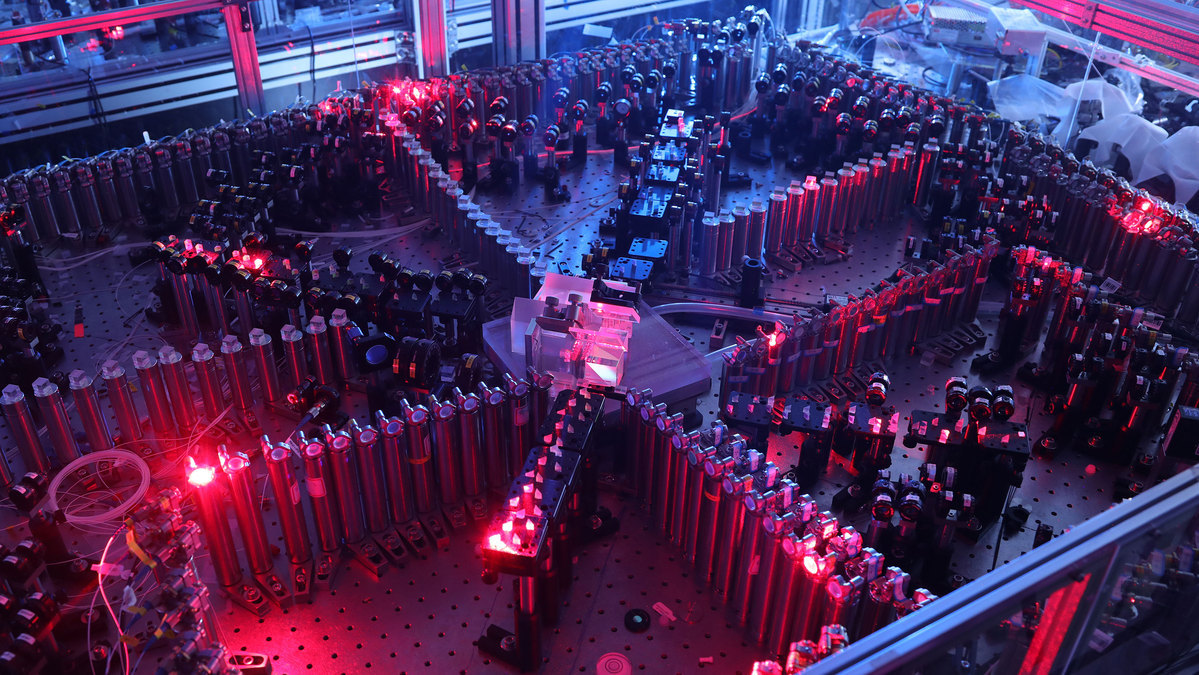 A section of the light-based quantum computer created by researchers at the University of Science and Technology of China. [Photo/Xinhua]

In the next five years, Chinese scientists hope to develop a long-distance, high-speed quantum communication system using only domestically made parts that can also be integrated with classical communication technologies, China's leading quantum scientist told China Daily in an exclusive interview.

In space, China plans to create mid－to high-orbit quantum satellites that can work around the clock, providing ultra-secure communication for business operations, said Pan Jianwei, a member of the 13th National Committee of the Chinese People's Political Consultative Conference, which just concluded its annual session on Wednesday.

In terms of quantum computing, Pan said he and his team aim to realize coherent manipulation of more than a few hundred qubits－the basic unit of information for a quantum computer analogous to a bit in ordinary computers.

Meanwhile, Chinese scientists will achieve high-precision manipulation of qubits, or quantum bits, the basic unit of quantum information, paving the way for the creation of programmable, universal quantum computing applications, he added.

"Quantum mechanics, which was devised at the beginning of the 20th century, is one of the most important scientific revolutions in history," said Pan, who is also an academician of the Chinese Academy of Sciences.

Taking advantage of the laws of quantum physics gave birth to the creation of quantum information technology, which mainly includes the applications of quantum communication, quantum computing and quantum metrology, the study of high-resolution, highly sensitive measurements, he said.

Quantum communication works by manipulating individual particles of light, called photons, into an entangled quantum state, and using them to transfer information. Any attempt to eavesdrop will disturb this delicate state, alerting the authorities to any attempted hacking, and thus protecting the communication.

According to a study published in the journal Nature in January, Pan and his teams have created the world's first integrated space-to-ground quantum network, which can provide reliable, ultra-secure communication among more than 150 users over a total distance of 4,600 kilometers across the country.

Pan said China's research and application of quantum communication has been leading the world, thanks to strong and forward-looking support from the central government.

This included facilitating the successful implementation of a quantum communication backbone network from Beijing to Shanghai, as well as the Micius quantum science satellite, which was launched in 2016. Both projects helped bring the massive integrated quantum network into being.

Therefore, it is crucial to further expand the effective coverage of quantum communication networks by integrating them with classical communication infrastructure, he said.

Scientists also need to create new ground-based quantum repeaters that can transmit signals across thousands of kilometers, as well as quantum communication satellites that can provide full-day coverage.

Meanwhile, it is necessary to promote independent research and development of core quantum devices, along with drafting new application standards, Pan said. "These efforts will ultimately promote the widespread applications of quantum communication in government affairs, finance, energy and others."

Unlike classical computers, which can only encode information in binary bits that take the value of either 1 or 0, quantum computers use qubits, which can exist in a quantum state of 1 and 0 simultaneously.

This allows the quantum machine to increase its computing power exponentially as the number of controllable qubits increases, eventually surpassing even the most powerful classical computer in a milestone called quantum computational advantage.

In December, the journal Science reported that Chinese scientists have created the world's first photonic quantum computer prototype, called Jiuzhang, which can solve a problem no classical supercomputer can tackle within a reasonable amount of time. It was the first time China had reached this milestone.

However, Jiuzhang is a highly specialized machine designed to do a single task. Therefore, Pan said, the next milestone will be creating quantum simulators to tackle complex real-world problems, such as new material design and optimizing computer algorithms.

The Jiuzhang prototype has already shown potential applications in the fields of graph theory, machine learning and quantum chemistry. "We hope that with the support from key national science and technology projects, such a quantum simulator will be realized in the next five years," he said.

The third milestone will be a programmable, universal quantum computer, but this will require manipulating at least millions of qubits free from decoherence－the collapse of quantum states due to environmental noise, he said.

Pan said quantum information technology has developed into a fiercely competitive arena, with many developed countries, including the United States, the United Kingdom, Germany and France, launching strategic plans to bolster capability in this field.

This trend gained more momentum after the success of China's Micius quantum science satellite. "This is because quantum information technology has developed to a point where it can reflect a nation's technological edge," Pan said.

"This is also a natural phenomenon for any discipline to develop to a certain degree. We cannot give up international cooperation because of competition, since quantum information technology will bring benefits to the entire human society.

"The advancement of quantum information technology in the future is the common responsibility of the global academic community," he said, adding China has been actively training international talent and is willing to share and exchange its progress in basic science and common technologies with international peers.

"We should persevere in communicating with outstanding international teams and working together toward the long-term goals in quantum information science."