An international research team announced on Thursday that it has discovered a site of more than 900 fossilized dinosaur tracks, covering an area of 9,000 square meters, the largest of its kind ever found in China. 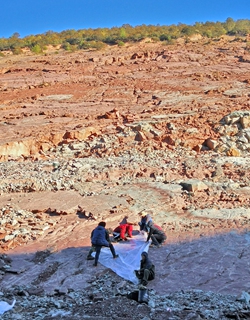 The dinosaur track site was located in a copper mine in Zhaojue County, southwest China's Sichuan Province.

From 2017 to 2019, paleontologists from China, the United States and Germany through fieldwork or using drone technology recognized at least 933 dinosaur tracks dating back 100 million years at the site, including China's longest recorded sauropod and ornithopod trackways, which are 80 meters long and 52 meters long, respectively.

Scientists believe these tracks were left by 68 trackmakers. Parallel tracks left by ornithopods were also found in the site, indicating that the dinosaurs, which were previously thought to be solitary, lived in groups.

Scientists have also found three smaller but important sites of dinosaur tracks nearby since the 1990s, bringing the number of recognizable tracks found in the county to 1,928.

The findings were published in the international journal Geoscience Frontiers in late February.

"Such a diverse set of dinosaur tracks is an excellent sample for studying Cretaceous dinosaur fauna in this area," said Xing Lida, lead author of the article and researcher at China University of Geosciences.

Xing also noted that mining operations had prompted the discovery of new records but also caused some damage to the sites. His team once tried to document the bits that remained after local mining companies broke up a site.

"The Zhaojue sites provide a good example of dinosaur track sites that require long-term study and monitoring to extract as much data as possible before evidence is lost," Xing said.

In the study, scientists called for more government efforts to preserve the sites, as the dinosaur tracks are "precious records from nature".