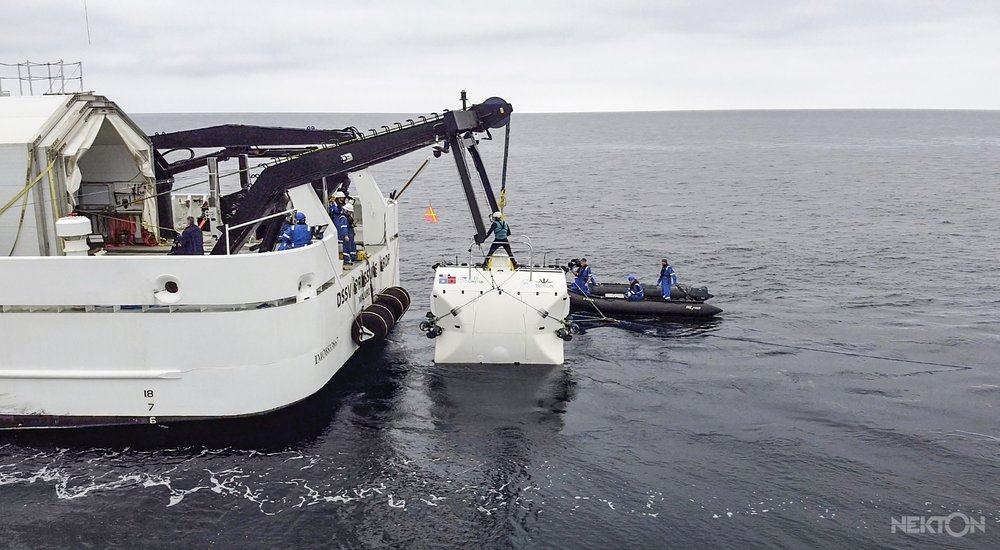 In this handout photo taken in Jan. 2020 and provided by Nekton, scientists lower the “Limiting Factor” submarine into the Mediterranean Sea, part of sea trials before the next stage of the Nekton Mission begins in mid-March. (Photo: AP)

A team of scientists is preparing to dive deep into the depths of the Indian Ocean — into a “Midnight Zone” where light barely reaches but life still thrives.

Scientists from the British-led Nekton Mission plan to survey wildlife and gauge the effects of climate change in the unexplored area. Working with the Seychelles and Maldives governments, the five-week expedition is targeting seamounts — vast underwater mountains that rise thousands of meters from the sea floor.

To explore such inhospitable depths, Nekton scientists will board one of the world’s most advanced submersibles, called “Limiting Factor.”

“What we do know is that beneath 1,000 meters (3,280 feet), there’s no light down there, but a lot of animals … are bioluminescent. It’s life that glows,” says Nekton mission director Oliver Steeds.

“The area that we’re going to be researching, it’s one of the most bio-diverse parts of the world’s oceans. So what we’re going to find there is unknown,” Steeds recently told The Associated Press in Barcelona, Spain, before sea trials for the submersible and its mother ship.

The AP will be covering the expedition exclusively from start to finish.

Last August, the “Limiting Factor” completed the Five Deeps Expedition, diving to the deepest point in each of the world’s five oceans. The deepest was almost 11,000 meters (36,000 feet) down — deeper than Mount Everest is tall.

To withstand such crushing pressures, the sub’s two-person crew compartment is wrapped in a nine-centimeter (3.5-inch) titanium cocoon. It also carries up to 96 hours’ worth of emergency oxygen.

“There are only five vehicles in the world that can get below 6,000 meters ( 19,685 feet), and only one that can get to the bottom half,” said expedition leader Rob McCallum. “So everything we do is new. Everything we see is virtually a new discovery.”

Last May, when “Limiting Factor” descended to the bottom of the Pacific Ocean’s Mariana Trench, the ocean’s deepest point, its pilot spotted a plastic bag.

“When we actually think of the living space on the planet for species, over 90% of that living space is in the ocean and most of that ocean is unexplored,” says Dan Laffoley, a marine expert for the International Union for Conservation of Nature.

“So it’s absolutely critical, at this time when we see such large changes occurring, that we get people down there, we get eyes in the ocean and we see what’s happening,” he said.

Scientists will combine their observations with those conducted last year during a seven-week Indian Ocean mission. They plan to present their findings in 2022.