Scientists from home and abroad have obtained a large amount of data recently by observing the solar influence on signals between China's first Mars probe Tianwen-1 and that of the European Space Agency (ESA) during a month-long Sun outage, which will help researchers to study the near-Sun space environment and its impact on deep space communications. 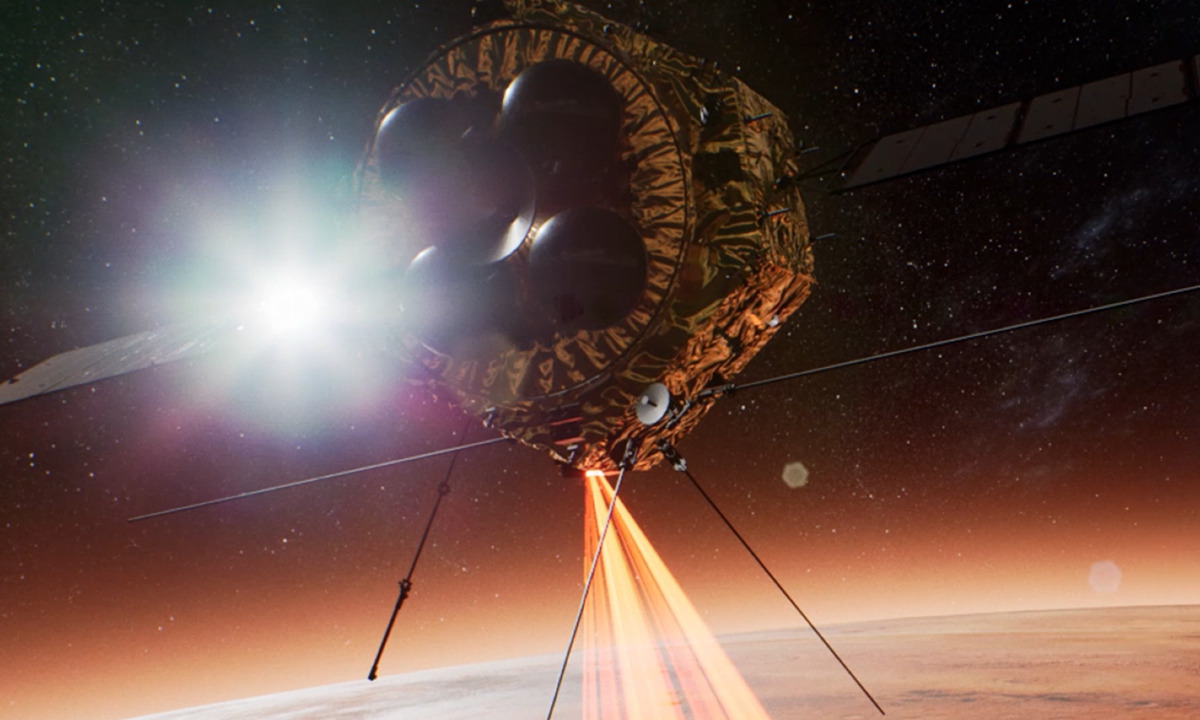 Illustration of the Tianwen-1 orbiter in the remote sensing orbit (Photo: CASC)

In late September, communication between China's Zhurong Mars rover and the Earth began experiencing partial or full blackouts due to disturbances caused by the Sun's radiation, which was caused by a phenomenon known as a solar outage, when the Earth and Mars fall on either side of the Sun in an almost straight line.
During the blackouts, China's Mars probe continued its observation together with the ESA's Mars Express orbiter. By transmitting radio signals from the two orbiters periodically to the Earth, scientists from multiple countries used more than a dozen radio telescopes to observe the signals under the influence of the Sun, obtaining a large amount of data.
More than six research institutes from China, Australia and Europe co-published the research results on The Astrophysical Journal Letters, a peer-reviewed scientific journal of astrophysics and astronomy.
According to one of the authors - Ma Maoli, a research fellow at the Shanghai Astronomical Observatory under the Chinese Academy of Sciences - when the Mars projection point was 2.6 Rs from the heliocenter on October 9, 2021, six observatories received radio signals from Tianwen-1 and Mars Express, with the strongest ±20 Hz turbulences occurring for up to 10 minutes.
By observing these turbulences, researchers have found that when the radio signals traveled through the near-Sun region, the total electron content changed by thousands of TECU, caused by coronal mass ejection (CME) phenomenon, a significant release of plasma and accompanying magnetic field from the Sun's corona into the heliosphere.
Experts said that the success of this joint study can be attributed to the high sensitivity of the radio remote-sensing observation of Tianwen-1 and the Mars Express, as well as high temporal and spatial resolution thanks to the collaboration of multiple stations in China and overseas.
The new study comes amid Western hype over China's Mars rover Zhurong, which went into hibernation in May and was expected to rewake last month. Some in the West said it is unlikely to resume operations, in an attempt to undermine China's space capabilities.
Zhurong was put into sleep mode in May last year to wait out the red planet's extremely cold winter and fierce sandstorms, but it has yet to re-connect with the Earth, after the season has passed.
Huang Zhicheng, a Chinese expert in aerospace science and technology, told the Global Times on Monday that hyping Zhurong's delayed wake-up to try undermining China's space progress is unjustified.
Being the country's first interplanetary mission, the rover fulfilled all its preset goals in August 2022 - with a expected lifespan of about 90 Martian days, or roughly 92 days on Earth - and it then survived the solar outage, providing a large amount of valuable data for world scientists to study.
Although it is spring time on Mars, waking up the rover needs to meet certain requirements such as the proper and warmer temperature, and whether the region in question could provide enough solar energy for such an operation, Yu Tianyi, deputy director of the scientific research planning office with the Beijing Aerospace Flight Control Center, told the Global Times on Monday.
"We have been closely following such conditions and admittedly there is uncertainty about the rover's solar panel - to what extent is it affected by sandstorms during the Martian winter? The panels' power generating capability could have been affected," according to Yu.
"We have to consider all those factors and uncertainties and we will wake up the rover at a proper time when all the conditions are met," he noted.
China launched the Mars probe on July 23, 2020, completing orbiting, landing and roving in a single mission, a feat that has no precedent.