TECH Scientists solve the mystery of the dragonfish with transparent teeth

Scientists solve the mystery of the dragonfish with transparent teeth 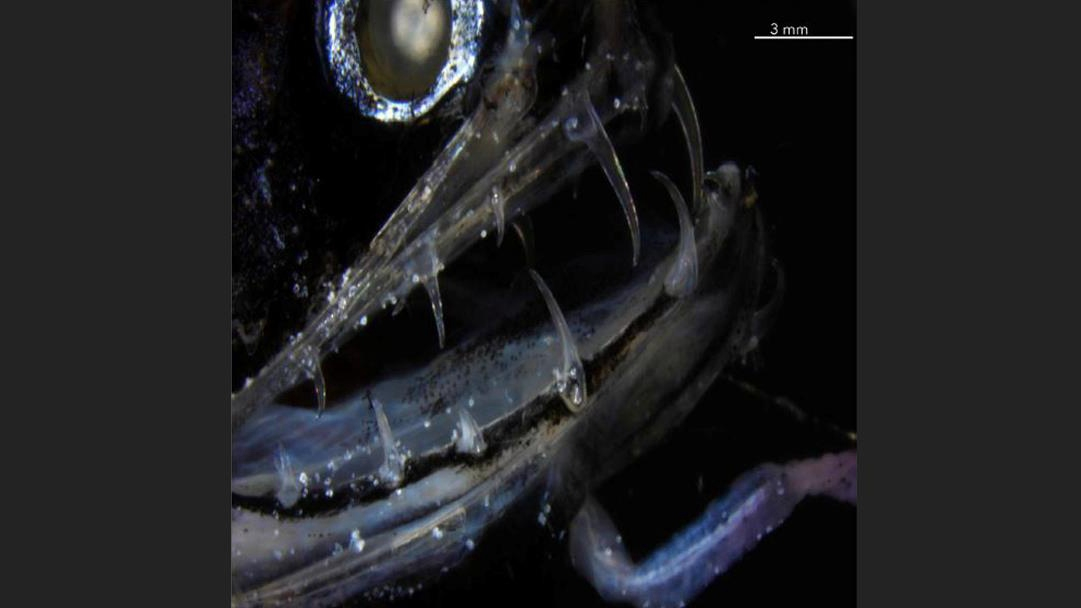 The transparent teeth of the deep-sea dragonfish are shown in this photograph released from San Diego, California on June 5, 2019. (Photo: CGTN)

Dwelling in the dark ocean depths, the dragonfish is a frightful marvel that would fit nicely into any horror movie, boasting exotic adaptations such as virtually transparent fangs that help it thrive in this extreme environment.

The nature of these see-through teeth had been a mystery, until now. Scientists on Wednesday described what makes these teeth so clear, saying they are made of the same basic material as human teeth but that it has been dramatically reorganized.

The researchers studied the dragonfish species called Aristostomias scintillans, caught at depths up to about 3,300 feet (1,000 meters) in the Pacific Ocean off California's coast. This pencil-sized species reaches 10 inches (25 cm) long, but possessing plenty of sci-fi monster qualities despite its small size.

It has a black, elongated, eel-like body, with a long, fleshy filament called a barbel hanging from its lower jaw with a bioluminescent organ called a photophore on the end to lure prey. It also has two rows of photophores along the length of its body. Its long, sharp teeth are big relative to its body size. Its face looks like the creatures from the "Alien" movies, and it has a similarly vicious disposition.

Its teeth, like ours, are made up of an outer layer of enamel and an inner layer of hard, dense, bony tissue called dentin. But there is a twist.

The enamel consists of nanoscale crystals embedded in the surrounding structure. The dentine consists of nanoscale fibers of the protein called collagen coated with a crystalline form of a mineral called hydroxyapatite, common in bones and teeth. These traits prevent any light existing in the near blackness from reflecting off the tooth surface, adding stealth to its hunt for other fish and shrimp.

"Thus, the mouth is invisible and the prey is caught more easily," said materials scientist Marc Andre Meyers of the University of California, San Diego, who led the research published in the journal Matter.

"Initially, we thought the teeth were made of another, unknown material," Meyers said. "However, we discovered that they are made of the same materials as our human teeth: hydroxyapatite and collagen. However, their organization is significantly different from that of other fish and mammals. This was a surprise for us: same building blocks, different scales and hierarchies. Nature is amazing in its ingeniosity."

A small number of other fish such as the anglerfish and hatchetfish have transparent teeth. "These have not been investigated yet, but I suspect they have a similar structure," Meyers said.