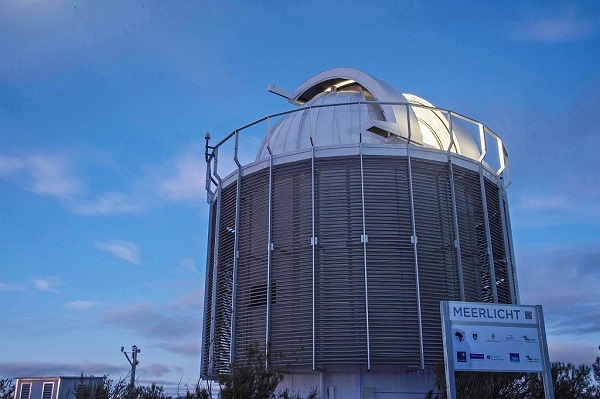 A picture taken on May 25, 2018 shows the new telescope MeerLICHT, at the South African Astronomical Observatory (SAAO). (File Photo: VCG)

David Buckley, senior astronomer from South Africa Astronomical Observatory, said that Kenya occupies a unique geographical area for astronomy on the equator but has no existing observatory.

"Such a telescope in Kenya would be the only research-class observatory in equatorial Africa, providing a focus of interest for the East Africa region and indeed the entire continent," Buckley said.

During the six-day symposium, the scientists from over 10 countries explored the benefits an observatory can bring in terms of capacity building in science, engineering and technology at all levels from primary schools to universities and industry.

Bitange Ndemo, Chairman of Kenya Optical Telescope Initiative said that the development of astronomical observing facilities will assist the country study the structure of the universe.

Ndemo noted that the establishment of an optical astronomical observatory would enable Kenya to leverage the project to achieve technology development in the area of optical engineering and related technologies.

He added that the giant telescope will enhance technology transfer into Kenya by allowing Kenyan scientists to work with international partners as possible stakeholders in the construction and running of the facility.

Paul Baki, head of physics and space science at the Technical University of Kenya said that the country's Northwest region around the Lake Turkana is an ideal location for an astronomical observatory because of its unusually low cloud coverage.

"This dry area on the equator gives access to more than 85 percent of the sky in both northern and southern celestial hemispheres," Baki said.