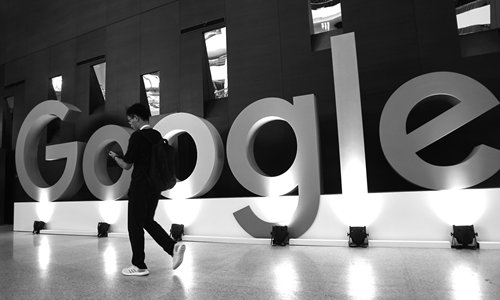 A man walks past a Google logo. (Photo: VCG)

Southeast Asian governments are banding together to take on global tech giants on issues including "fake news" and taxation, marking a new stage in the region's approach to the Internet's explosive growth.

The stakes are high both for the governments, which are counting on the digital economy to drive growth and innovation amid domestic political tensions, and the companies, which view Southeast Asia's social-media-loving population of 641 million as a key growth market.

The new initiatives, which have not previously been reported, include an effort by Indonesia to join forces with Thailand, Vietnam and the Philippines in demanding action from Google, Facebook and other companies on content regulation and tax policy.

"Together, we are 80 percent of the region," Indonesian communications minister Rudiantara said. Indonesia is already preparing legislation requiring tech companies with online services to pay value-added tax on local sales, even when they are booked offshore.

Meanwhile, Thailand's telecom regulator, in a late-August meeting with regional counterparts, proposed that all 10 members of the Association of Southeast Asian Nations (ASEAN) require internet and streaming video firms to set up domestic "verification centers" to combat fake news.

Thailand also urged discussion of how to demand "economic contributions" from internet firms, whether through taxes or fees, according to a copy of a speech seen by Reuters.

The council of ASEAN telecoms regulators has accepted Thailand's proposal for the centers, and a separate document with guidelines for economic contribution is expected to be formally adopted at the November ASEAN summit, a source in the Thai regulatory agency with knowledge of the talks said.

"ASEAN as a group gives us enough leverage, and our combined user base on services like Facebook is big enough to lend us negotiating power," the source said.

The initiatives reflect widespread concern that Internet services, to which most people in the region have gained access only in the past few years, are fanning ethnic and religious animosities while avoiding paying their fair share.

Activist groups are nervous about the potential for institutionalized censorship. According to Freedom House's 2018 Net Freedom survey, all Southeast Asian countries rank as either not free or partly free.

Emilie Pradichit, director of the Thailand-based Manushya Foundation, which advocates for online rights, told Reuters that governments in the region could use the label "fake news" to target dissidents. She called on companies to resist such attempts.

"We believe the governments should themselves not use untrue information to achieve goals that are to their advantage, and private sector organizations, such as Facebook, should take the lead in protecting netizens' online freedom," Pradichit said.

"The potential of the region's digital economy … will likely be blunted by overregulation or indiscriminate taxes and fees," AIC director Jeff Paine said, urging governments to focus on "industry partnerships and collaborations."

It is not yet clear what level of support the new proposals enjoy and how they might be implemented in coming months.

Indonesia's plan follows its successful effort to get Alphabet Inc's Google to pay taxes on Indonesia-related advertising revenue booked at its Asia headquarters in Singapore.

"Other countries asked me how we were able to achieve that, so I offered to them that they [could] piggyback off Indonesia to deal with the platforms," Rudiantara said.

Rudiantara is now planning a "three letter system" wherein if a platform fails to respond to three government requests to engage on an issue, he'll ban them. The proposal to neighboring countries includes a shared channel to communicate with the companies.

The Thai regulator wants to require internet companies to set up and fund "verification centers" in each Southeast Asian country.

The Thai proposal aims to ensure that companies take quick action on fake news and fake accounts. Facebook, Twitter and Google's YouTube all have elaborate policies on what is allowed on their platforms and generally ban fake accounts, deceptive practices and hate speech. Content that is simply false, however, is usually allowed.

"They said they already have a fast process to tackle issues, but we insisted it's still too slow," said Takorn Tantasith, secretary general of Thailand's National Broadcasting and Telecommunications Commission.

Officials in Cambodia, Indonesia, and the Philippines said they support the verification center plan, saying fake news was a core national concern.

Philippines communications technology undersecretary Eliseo Rio said the country's authorities are also working on a "one-stop" content-reviewing mechanism, where if one country decides something is disinformation, the company would remove it altogether and not just block it locally.

"The individual governments can conclude these are fake," he added.

Rights watchdogs have warned that media freedom is declining in the Philippines, with several officials accused of propagating disinformation campaigns against opponents.

Sources familiar with the regulators' proceedings, however, said support for the verification centers was not unanimous across Asia.

Three executives at targeted companies said they didn't believe the idea would work, in part because it includes a wide range of global companies.

Facebook, Line Corp, Amazon, Netflix and Walt Disney were among those that attended a meeting in August with regulators to discuss the proposal.

Both Singapore and Indonesia already plan to impose GST taxes on foreign companies offering digital services, and talks are ongoing among Southeast Asian regulators for a region-wide effort.

"Missing income is also a problem, and we asked for their cooperation on this too," Takorn said.