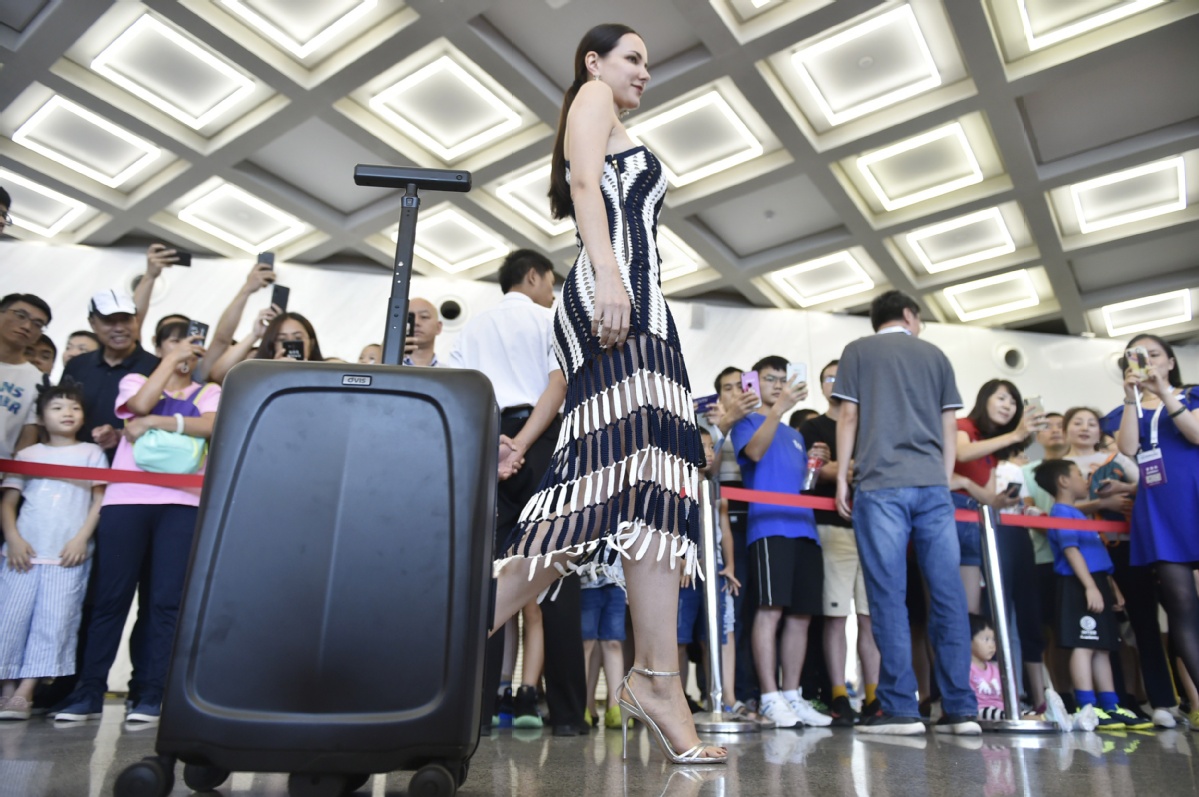 A suitcase that can follow and also predict the path of its owner attracts visitors at the 2019 World Robot Conference in Beijing on Saturday. (Photo: Xinhua)

A suitcase automatically follows its owner around, turns a corner, and halts immediately when the owner stops to talk with a friend. A backpack functions as underwater propellers to help diving enthusiasts swim better in the sea. These are not science fiction.

Neither are an air purifier that rushes to a living room when it "notices" that someone is smoking there, or a self-driving electric scooter that swerves around obstacles and pilots itself back to a charging station.

All of these are very real and could be seen at the robot exhibition of the 2019 World Robot Conference, which ended on Sunday in Beijing.

With rapid advancements in artificial intelligence technology, robotics no longer involves only cumbersome industrial machines that sit behind safety barriers at factories, or cute but useless devices being used by companies in marketing campaigns.

The improvements of computer vision and voice recognition technologies have helped robots enter into people's daily lives at a faster pace and at affordable prices, said officials, company executives and experts on the sidelines of the robotics gathering.

"With breakthroughs in crucial technologies and declining production costs, a wide range of new robotic forms and application scenarios are emerging," said Xin Guobin, vice-minister of industry and information technology. "Robotics research and development is also spreading from the industrial sector to healthcare, home services, education and other areas."

The market size of the country's robotics sector is expected to hit $8.68 billion this year, accounting for about 30 percent of the global robotics market, the Chinese Institute of Electronics forecast in a report. That figure would mark an average annual growth rate of 20.9 percent from 2014 to 2019.

Specifically, the market for service robots will be valued at $2.2 billion this year and boasts huge growth potential in coming years, thanks to people's rising income and the country's graying population, the report said.

Qi Ou, the founder of ForwardX, a company founded in 2016 that has developed a smart suitcase custom-built to follow its owner, said the increasing integration of AI and robotics makes robots smarter, and more efforts are being made to leverage technological progress to enhance people's lives.

According to Qi, the company's suitcase, called Ovis, has been implanted with a pair of "eyes" and a "brain" that allow the suitcase to follow and predict the path of its owner while avoiding obstacles. It is designed for busy travelers who seek a hands-free and stylish travel companion that can make traveling a breeze.

Ovis is equipped with five cameras, four of which form a 360-degree sensing ability to capture the environment in real time. It also has built-in facial recognition software and a body movement tracking algorithm, which allows the device to follow its owner closely throughout the terminal at airports, said Qi, a former employee of the US tech company Oracle.

"It is not just a suitcase but a prelude of how personal robots can eventually function. For instance, in the future, when you show the robot your boarding card, it will be able to lead you to the boarding gate through the best route," Qi said.

China's increasing number of middle-income consumers have a growing desire for service robots to help deal with a range of tasks including domestic cleaning, transportation, home security and surveillance, said Luo Jun, founder of the Beijing-based International Robotics and Intelligent Equipment Industry Alliance.

At the exhibition, Ecovacs also demonstrated an air purifier on wheels that can be notified by a remote detector of cigarette smoke in another room, and move to that area to clean the air.

Zhang Wentao, a robot enthusiast who has visited the exhibition for three years in a row, said, "It is thrilling to see that technological advancements are making more robots available for us."