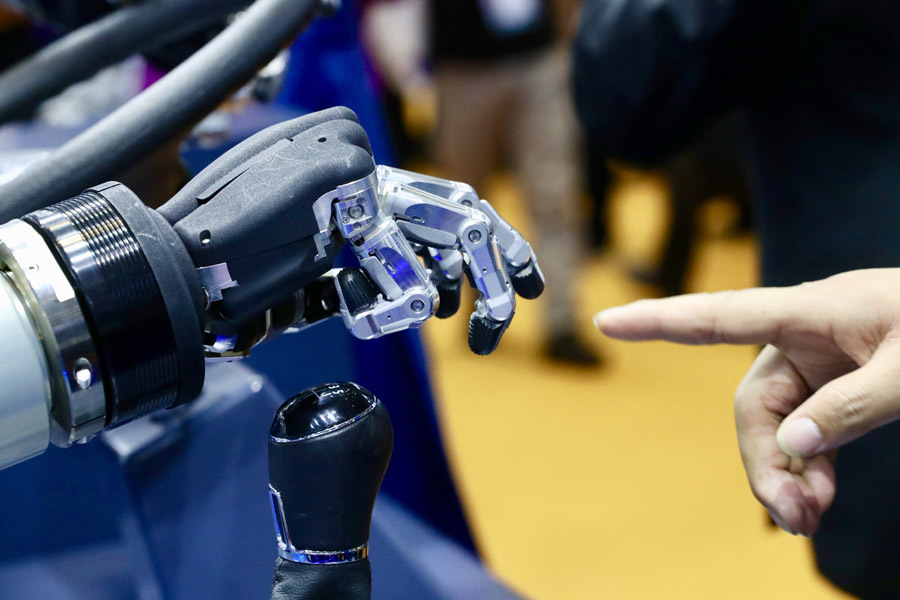 A visitor touches an automated hand at an exhibition during the second CIIE in Shanghai on Nov 6, 2019. (Photo: Zhu Xingxin/chinadaily.com.cn)

Shanghai passed a bill on Monday to push forward the development of the city into an international innovation center.

The bill will support innovative entities to lead, organize and participate in big international science projects and encourage the latest scientific research information, data and big science facilities to be shared to spur more innovation.

Shanghai has long aimed to become an international pioneer in science and technology. The city is planning to build a basic framework for a scientific and technological innovation center with global influence by the end of this year, according to the municipal government.

Statistics from the Shanghai Science and Technology Commission show that Shanghai scientists published 87 papers in top international scientific journals such as Science, Nature and Cell last year, accounting for 28.4 percent of the national total. The commission said that this demonstrates the city's increasing strength in basic research in strategic technological areas such as health, materials and security.

The city has also launched big scientific facilities, such as a super-intense and ultrashort laser system and translational medicine infrastructure. The construction of other major projects, including a seabed observation network and high-efficiency low-carbon gas turbine experimentation facilities, has also commenced.

Wang Nai, deputy director of the Promotion Office of the Construction of Scientific and Technological Innovation for Shanghai, said there are 14 national-level scientific infrastructure projects that will be put into operation by 2025.

A series of research and development institutes have also been inaugurated, including the Shanghai Research Center for Quantum Sciences, the International Innovation Center of Tsinghua University Shanghai, the Fudan University Human Phenome Institute and the China-Israel Innovation Hub.

Liu Minghua, a legislator for the city, said that she and some other lawmakers were delighted to see in the government work report that Shanghai's R&D expenditure accounted for 4 percent of its GDP last year, and the large investment will continue in the new year.

"The R&D expenditure ratio in the United States, Germany and Israel, which are famous for advanced innovation worldwide, were 2.8 percent, 3 percent and 4.6 percent respectively, and Shanghai's figure almost doubled the national average," said Liu, who is also managing partner at East China for Deloitte Touche Tohmatsu.

Wang Zhimin, a legislator for the city, said the bill will encourage innovation from not only government-funded research institutes but also companies in the areas of basic and applied research.

"This is particularly important to the further development of some of the city's key innovation zones, such as Zhangjiang in Pudong district, and will play a vital role in realizing Pudong's development goal of breaking 2 trillion yuan ($290 billion) in GDP in around seven years, doubling the figure of 2018," said Wang, who is also a researcher with the Chinese National Human Genome Center at Shanghai.