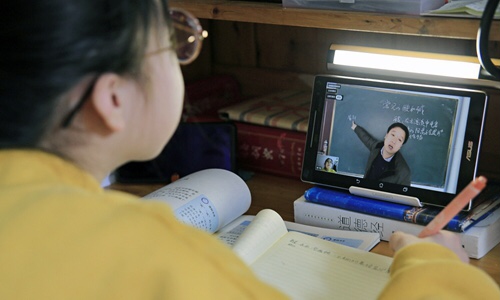 A student takes an online course at home in Yuncheng, North China's Shanxi Province during the coronavirus outbreak. (Photo: IC)

The rapid boom of China's online education business amid the novel coronavirus (COVID-19) epidemic has promoted the application of 5G technology in educational use.

Although multiple provinces have announced the reopening dates for universities and primary and middle schools in succession, the COVID-19 has acted as a catalyst for the online education industry as hundreds of millions of Chinese students have been obliged to study from home to avoid the contagion of the virus.

Previously, several media reports highlighted that due to large-scale website visits, downloads, and educational interactions between teachers and students, the network continued to be congested and servers malfunctioned.

An employee, surnamed Li, from Squirrel AI Learning, an online education platform, told the Global Times on Saturday there was some malfunction of the network during peak hours when almost all the Chinese students study from home using the internet.

"Although the network in Shanghai was okay, the network functioned poorly in some other smaller cities," Li noted.

Shanghai Municipal Commission of Economy and Informatization revealed that the city will accelerate the deployment of a dedicated network for education and application of 5G technology in the education sector to fundamentally ensure fast, stable, and controllable network services and green and safe network environment for online education, The Paper reported Friday.

According to the commission, data from analytics company QuestMobile shows the number of daily active users on learning applications has surged to 127 million after the Spring Festival from the previous 87 million on usual days, an increase of 46 percent. Among them, daily active users of elementary education increased by 23.81 million.

The commission found that the reason for the surge in registered online users is the transition of courses from offline to online. But it will take some time to find out if the online education can still maintain its user base after the epidemic ends because traditional classroom-oriented teaching curriculum can barely be replaced by online education and school life is significant to children's socialization.

However, the commission believes online education will be the trend for future education and it will co-exist with the traditional curriculum.

After the outbreak of the epidemic, Squirrel AI Learning closed all its 2,000-plus offline campuses and moved to online courses, following which the platform's business achieved an eight-fold increase.

"While other companies went bankrupt, my company made a profit on the contrary," Li said.

Shanghai will accelerate the deployment of network bandwidth and infrastructure construction, and begin the design, verification, deployment, and application of a dedicated 5G education network.