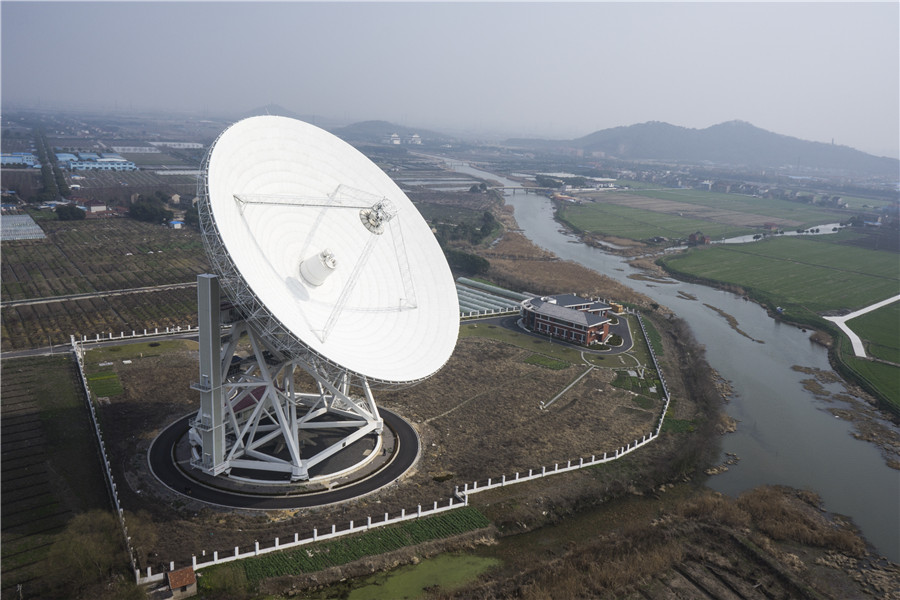 The Tianma radio telescope in Shanghai, which won the top prize in the 2018 Shanghai Science and Technology Awards. (Photo: China Daily)

A radio telescope in Shanghai that has made significant contributions to astronomy for nearly a decade and participated in long-term observations used to confirm data in the first image of a black hole in deep space, won the top prize on Wednesday at the 2018 Shanghai Science and Technology Awards.

At 65 meters in diameter, the radio telescope Tianma－or heavenly horse－located in the suburban Songjiang district, is the largest omnibearing movable telescope in Asia and is ranked third in the world in comprehensive performance. It began providing celestial observations in 2012.

While Tianma was not directly involved in the observations that led to the black hole image, its ability to see other phenomena in the universe on certain wavelengths, contributed to the precise calibration of the final data for the image, scientists in Shanghai said. Tianma is part of the East Asia Very Long Baseline Interferometry Network, or EAVN.

Shen Zhiqiang, head of the Chinese Academy of Sciences' Shanghai Astronomical Observatory and a member of the Event Horizon Telescope (EHT) international team that assembled the black hole image－more than 200 astronomers worldwide linked via a globe-spanning array of eight ground-based radio telescopes－said that the equipment capturing the signals that were eventually translated into the image detected wavelengths of 1.3 millimeters, and there was no corresponding equipment in China.

But Tianma, part of EAVN, together with telescopes in the Republic of Korea and Japan, had been making observations at wavelengths of 7 and 13 millimeters for a long time, Shen said.

"EHT could capture the image without assistance of the network but the supporting observations provided supplemental information and showed consistency with the EHT observations to better verify their accuracy," Shen said.

"The job of the network was included in one of the six papers about the research published by The Astrophysical Journal Letters in the United States," he added.

The image, which showed a ringlike structure with a dark central region－the black hole's shadow－depicted the black hole at the heart of Messier 87, a massive, distant galaxy in the nearby Virgo galaxy cluster. It is 55 million light-years from Earth and has a mass 6.5 billion times that of the sun.

It was one example of the role that Tianma has played in international coordinated observations. Its super sensitivity has made its observations useful as a reference by which other participants in the network can adjust their data, according to the Shanghai Astronomical Observatory.

"Tianma elevated the image quality of the EAVN, by about 50 percent, making a great contribution to the research on extreme objects in the universe, such as black holes," Shen said.

"It currently plays a leading role in the network. All the other telescopes have diameters of 20 meters at most. Tianma can receive more signals than all of them combined," Shen said.

Tianma has also played an indispensable role in determining orbits for China's moon and deep space explorations. It will also determine orbits for the country's first Mars exploration in 2020, Shen said.