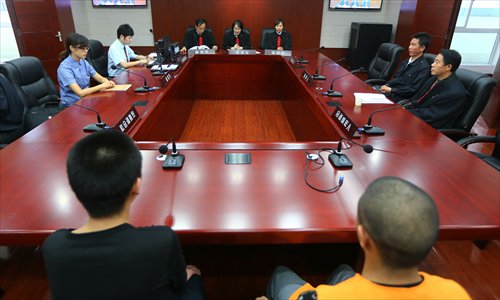 Judges, prosecutors and defendants sit around a table during a trial at the Kunming Intermediate People's Court in southwest China's Yunnan Province. (Photo: VCG)

Shanghai has adopted an artificial intelligence (AI)-supported system to handle criminal cases and facilitate judicial hearings, which is dubbed as a 24-hour judge's assistant.

Shanghai-based news site thepaper.cn introduced the system to the public on Tuesday, two days before the opening of the World Artificial Intelligence Conference 2019 from August 29 to 31 in the city.

The system can transcribe a suspect's testimony at hearings because it can recognize a speaker's identity based on conversations in a courtroom.

Ma Changshan, a professor at East China University of Political Science and Law in Shanghai, said the system could transfer large amounts of legal documents to electronic data and mark them.

The AI system captures the elements of a case in the electronic files, such as time, place, people, behavior and consequences, Ma, who is doing research on the system, told the Global Times on Tuesday.

Besides, the AI system is capable of identifying defective evidence to avoid wrongful convictions, thepaper.cn reported.

Ma explained that a suspect may make multiple confessions and the AI system could instantly detect contradictions in the person's several statements.

The system can also respond to oral commands and display evidence and information on digital screens of different parties in a courtroom at a hearing, which shortens the time to present evidence.

The AI system started with criminal cases because the legal charters are more complete and clear for AI to "learn" and mark accordingly in specific cases, Ma said.

Ma hailed the 206 system as a 24/7 judge's assistant that makes the process more efficient, objective, transparent and accurate. Data from judicial, procuratorial, public security authorities and courts are all connected in the system.

In January 2019, the 206 System made its debut at a courtroom in the Shanghai No 2 Intermediate People's Court.

Shanghai is building an AI pilot zone amid a worldwide AI race. It released a guideline in May to provide financial support to AI projects, including both basic theoretical research and related applications of AI core technology.