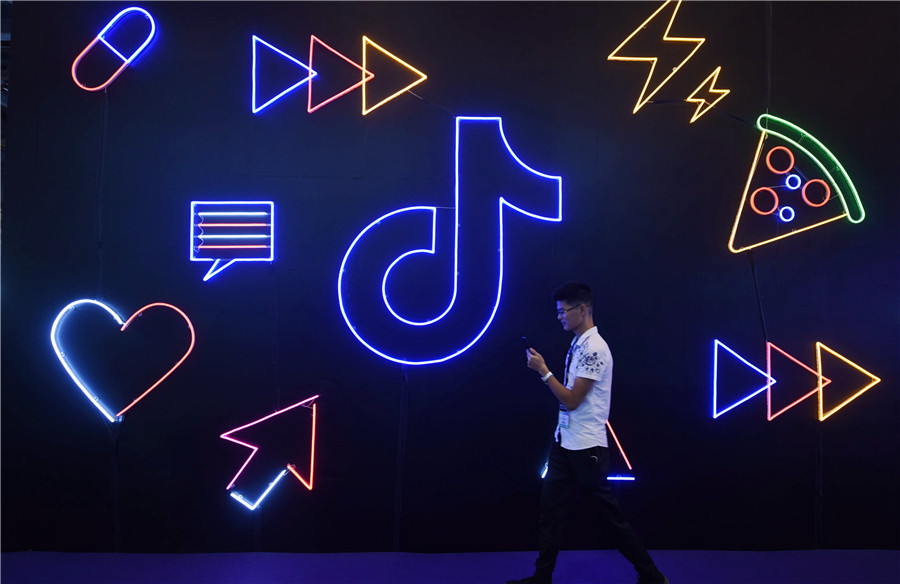 A visitor walks past the booth of Douyin during an industry expo in Hangzhou, capital of Zhejiang province. (Photo: China Daily)

Short video applications are not only flourishing in China, but gaining more strength as people across various age groups and geographical locations are using them to kill time, record lives, and even make a fortune.

Douyin, the most popular short video app in the country, said on Monday that the number of daily active users on its app had risen to 400 million by January. That represented a whopping rise from the 250 million recorded during the same period a year ago, according to an annual report summarizing the app's highlights in 2019. Such an achievement is phenomenal, considering that the app made its debut in 2016.

At first glance, it would be easy to assume that Douyin is largely used by the trendy and savvy Generation Z customers. Not exactly, say the experts, adding that Douyin is also an integral part of virtual family get-togethers. The company said some 3.08 million parental-themed issues were shot and uploaded on Douyin last year, whereas 460,000 families have utilized Douyin for recording family portraits.

People of virtually all ages are glued to the app, and they double as both viewers and content curators, the company said. For instance, those in their 50s were more keen on creating dance-related videos and enjoyed watching video clips on wedding scenes.

Those born in the 1980s adored recording childhood memories with phones and watching beautiful scenery, whereas teenagers and younger customers were keen on videos regarding animes, comics, and cute pets.

As an emerging emotional bond, Douyin witnessed 1.76 million new born babies, 180,000 college entrance exams, 380,000 graduations and 7.09 million shares of weddings as avid users chose to record and upload videos of these momentous occasions in their life onto the platform.

Douyin said the platform has enhanced mutual understanding and encouraged positive energy. Videos featuring teachers, nurses, firefighters, traffic police and doctors got the highest number of likes last year and were in the top five categories.

Due to its increasing ubiquity, Douyin is shaping up to be an unavoidable bellwether for the popularity of tourist attractions. The platform saw 6.6 billion "check-ins" at tourist sites across 233 countries and regions, with one video featuring an ancient city wall in Xi'an being played 2.3 billion times.

Industry experts are also now realizing the potential of such platforms. Chinese millennial travelers tend to favor destinations that are considered to be off the beaten path, and the likes of Douyin are normally placed where they turn to find inspiration, said Peng Tao, Airbnb's China unit president.

"They appear to be enthusiastic about going to new destinations … and as trend followers, they follow popular routes on social media apps such as Douyin," he said.

Short videos have become one of the fastest-growing media phenomena in China. Typically lasting 15 seconds to a few minutes, video clips on apps like Douyin and rival Kuaishou are consuming around 9 percent of Chinese internet users' time, with the percentage constantly on the rise, according to digital consultancy QuestMobile.

With followers amassed at warp speed for top influencers, businesses are also sensing marketing opportunities. This year more marketing dollars will be given to short videos and live streaming for better engagement with customers and the creation of compelling content, according to Maggie Wang, president of data marketing technology firm AdMaster.

"For social marketing, it has become more imperative to generate original content to resonate with spectators," she said. "It's highly likely to turn clicks into cash if the contents are to their tastes."