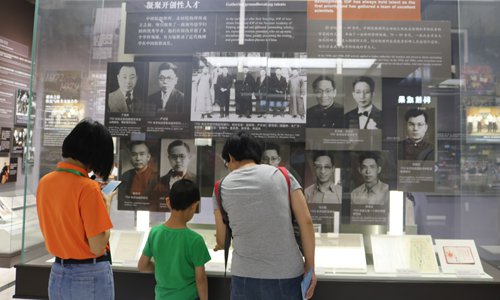 Residents visit the Institute of Physics of the Chinese Academy of Sciences when it opened to the public on May 19, 2018. (Photo: VCG)

A report on short video and knowledge communication indicates that as of the end of 2018, a total of 180,000 vloggers who had more than 10,000 followers on popular video-sharing platform Douyin, known as TikTok overseas, were creating knowledge-related videos. They have shared knowledge in more than 3 million short videos that have been played more than 33 million times.The report was jointly released on January 8 by the School of Journalism and Communication of Tsinghua University, Science and Technology Daily and the Beijing-based Bytedance Technology Company, which runs Douyin.During the report presentation, Xie Weihe, dean of the School of Journalism and Communication of Tsinghua, said that in the new era, knowledge communication requires new information technologies, and short videos help boost the spread of knowledge.Wang Ruiqiang works for the new media department of Chinese Academy of Sciences (CAS). In 2018, his team decided to launch an account on Douyin to spread scientific knowledge by using funny short videos. Today, the account is followed by 396,000 users.Although it is supposed to be a serious official account, they use amusing internet catchphrases to explain scientific documentaries, a rap song to explain China's Chang'e-4 lunar probe, explaining the naked carp's breeding migration the way a sports commentator explains a match, and turning China's largest telescope FAST into a hotpot.One user commented, "Honestly, academic institutions have become so naughty nowadays."Creating contentXie called on people from academic circles to bring more knowledge to the public by using one-minute videos on platforms like Douyin.A total of 20,000 science video creators are based in Douyin, including not only academic institutions such as CAS and the China Science and Technology Museum, but also private accounts such as "Teacher Xiangbo" and "Global village commentator", which have millions of fans, according to the Beijing Daily."Greenland, the world's largest island, appears to be the same size as the US in a map, but it is actually much smaller than the US, smaller even than India," a short video published by "Global village commentator" explained.As of March 21, the video titled "Too many errors in the current world map" had been played 50 million times and drew more than 1.8 million likes on Douyin.Specializing in spreading the knowledge of astronomy and geography, "Global village commentator" has gained more than 7.3 million subscribers, and his short videos have been played 500 million times. One video received more than 28.5 million likes on Douyin, the only platform he uses.

A survey released by the China Association for Science and Technology on September 18, 2018 at the World Conference on Science Literacy shows that the number of Chinese possessing basic scientific literacy is on the rise, with 8.47 percent of the population now scientifically literate, compared with 3.27 percent in 2011.However, this figure is still much smaller than in developed countries, as the figure was 42 percent in Canada in 2014, according to the Canadian Council of Academies.The Bureau of Science Communication of CAS, China Association of Science and Technology, the China Science and Technology Museum and Bytedance Technology Company jointly launched a project on March 21, aiming to improve people's science literacy in China through short videos.The project had the participation of 13 academicians from CAS and the Chinese Academy of Engineering, 25 research fellows from CAS and other scientific knowledge video makers. They make high quality content and work as consultants to review and provide scientific knowledge in the videos.The report on short video and knowledge communication points out that short videos on Douyin bring scientific knowledge closer to people's daily lives. Short video platforms produce and spread knowledge in a more eloquent way, which lowers the threshold of knowledge production, stimulates people's enthusiasm for knowledge communication and attracts more people to participate in knowledge communication through sharing their life experiences.