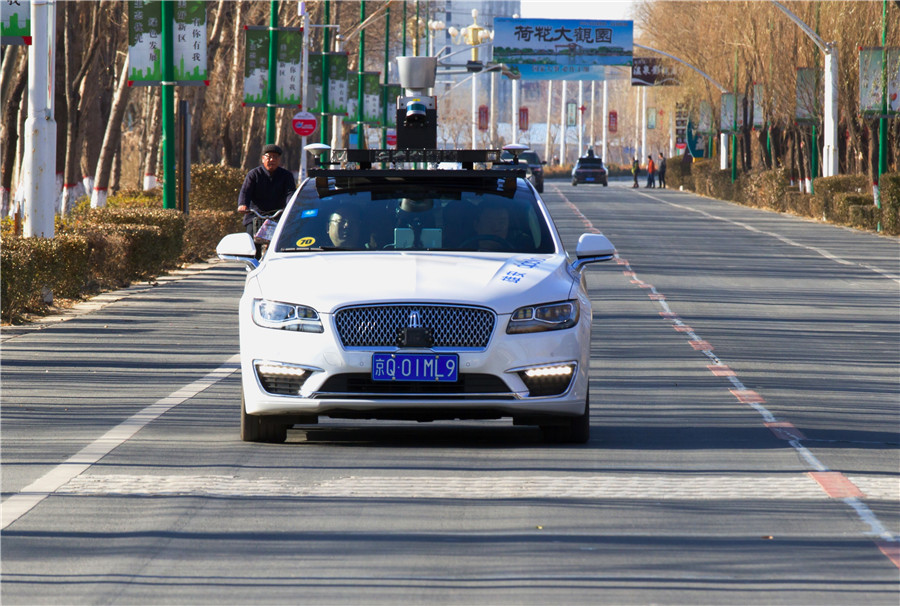 An Apollo autonomous vehicle of Baidu drives in Xiongan on Dec 20, 2017. (Photo: Xinhua)

Autonomous driving has entered the next stage of development in China with several regions coming together to build the world's first "smart" highway, enabling the nation to gain a toehold in intelligent connected vehicles.

Earlier this week, a highway project dedicated to autonomous vehicles was launched in Shandong province. The 26-kilometer highway, built with technologies needed for unmanned driving including 5G systems, three-dimensional maps and road sensors, will be opened in September this year.

By next year, the renovated highway will be able to provide a reliable testing environment for intelligent connected vehicles. It will take another one or two years to expand the expressway into a comprehensive autonomous driving base to offer multi-scenario tests, said experts.

"We are planning to build the highway into a leading national pilot zone with real test scenarios for intelligent connected vehicles, and furthermore, an autonomous driving cluster with testing, research and development as well as service centers," said Wang Yuezhong, chairman of Qilu Transportation Development Group, the main builder of the highway.

Apart from Shandong, many of its peers including Zhejiang, Hebei, and Gansu provinces are pushing forward "smart" highways to rev up the public rollout of unmanned cars.

In Zhejiang, a "smart" highway between Hangzhou and Ningbo will be available by 2022. The 161-kilometer six-lane expressway can cater to speeds of 120 kilometers per hour.

Also, the route will be embedded with technologies including navigation and cloud computing to provide real-time services for the driverless vehicles.

Earlier this month, a new freeway linking Beijing and the Xiongan New Area in Hebei began construction. The 100-kilometer freeway will soon be open to two-way traffic, with two of the eight lanes specially designed for autonomous vehicles.

"China's solid infrastructure construction and high attention from government authorities give the country capabilities to build a highway and develop related technologies quickly and efficiently," said Sheng Gang, chief engineer of the road design unit under the Ministry of Transport's Research Institute of Highway.

The "smart" highway, according to Sheng, will leverage technologies including superfast telecommunications, big data and cloud computing to offer real-time and accurate sensing in roads, stable and reliable transmission between people and objects, wise road management as well as convenient services including intelligent charging.

"From a long-term view, China is building the 'smart' highway for autonomous driving and intelligent collaboration vehicles and roads. Also, the nation aims to gain a lead globally in the field," he said.

To make it a reality, Zeng Qinghong, chairman of Guangzhou Automobile Group, noted that the first challenge is to develop "smart roads".

"The construction of current roads and related infrastructure, for instance, hardly considers features or demands of the internet of vehicles. That creates difficulties for intelligent connected cars to drive on the road," he said.

Miao disclosed at the Boao Forum for Asia in March that the ministry has reached a major consensus with the Ministry of Transport to make traditional roads and related infrastructure "digitalized" and "intelligent".